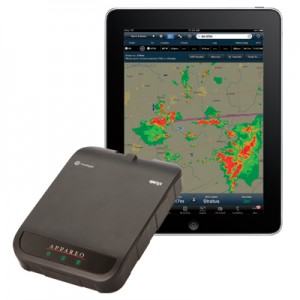 Non-commercial pilots have historically been the early adopters of technology for use in the cockpit; however the iPad has been a game changer. You see your iPad is not only a cool thing to watch movies on; for the last few years pilots have been using it as a portable moving map display. Before the iPad and other tablets, having a moving map in a light aircraft has been prohibitively expensive.

Now companies are making technology to enhance the performance of the iPad in the airplane as demonstrated by the unveiling of Stratus, a wireless GPS receiver for use with iOS devices . Sporty’s, the largest pilot shop in the United States made the announcement at Sun ‘n Fun 2012 last week. The receiver connects to the iOS device via WiFi for use by an app called Foreflight. The iPad has changed the way pilots manage their navigation information, as the paper charts that visual and instrument pilots use to navigate have mostly been reduced or eliminated. That has saved weight and time flipping through books to find the right chart while flying the airplane. I can hear the trees cheering.

The visual displays are so versatile, zooming in close on charts, toggling between charts and information, and timely weather information. Before electronic charts, you had to have all the charts for each area you flew over, that could mean multiple books. Plus, the charts would expire after 56 days which meant having to buy new ones periodically.

The upside to Stratus is that it delivers weather information and Nexrad radar for free through the Automated Dependent Surveillance Broadcast (ADS-B) system that is slowly being rolled out by the FAA. ADS-B is an enhanced real-time traffic system that allows both ground radar controllers and aircraft to see the same radar picture, sharing traffic information that the other entity might not have. Currently, to have up-to-date weather and radar information delivered to the iPad through its GPS receiver requires a subscription through a private service.

You wonder how you can have wireless signals in an airplane? The prohibition only applies to commercial passenger carrying operations. Private aircraft, where this product is aimed at are not under the same restrictions; meaning they are free to tempt fate. But there has been no firm causal link between cell phone or other wireless usage and interference with aircraft navigation systems. What risk there is, is very low.

The key takeaway is that some consumer-grade electronics like the iPad are so advanced and reliable that the FAA has mainstreamed their use on the flight decks of private flyers and now major airlines and air charter companies.