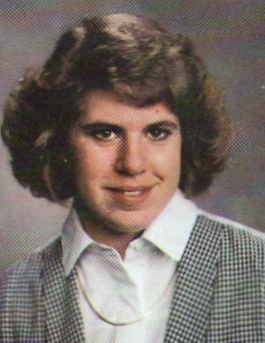 Brummer was convicted in Gonstead’s murder based on circumstantial evidence and a jealousy motive involving Brummer’s ex-girlfriend Bea (not her real name) who Sarah knew since childhood. Bea had been thinking of dating men again, and Sarah may have been involved in helping her through that process. One of Sarah’s friends says she was likely trying to be helpful to Bea, but she was not a forceful person.

This post is not supposed to be a critical examination of the facts; that’s for another time. Rather, I was motivated to write down what I had been thinking about since I first learned Sarah had been killed. Whether Penny Brummer is to be believed is not as important as what I and other friends and acquaintances of Sarah know about her, which is not the same Sarah Gonstead described to police.

Despite her conviction, Penny Brummer has insisted all along that she is innocent. Her case has been the subject of one book and somewhat of a cause for one local columnist. Off and on since 1999 the Wisconsin Innocence Project has been researching Brummer’s case and recently filed a motion in Dane County to have a new round of DNA testing done on samples from Gonstead, as well as a tissue and a Taco Bell cup found near her body.

Dane County District Attorney Ismael Ozanne last month approved the DNA testing, which is by far the biggest development in this case in years. I wish for Sarah’s killer to be punished, but I also believe in justice for all. For as much as I have read about the circumstantial evidence against Penny Brummer that casts doubt that she’s the killer, it’s also hard to look past Sarah the person, and why her very personality makes Brummer’s accounting of events suspicious.

Sarah and I were mostly casual school-day acquaintances. We shared homeroom, and I got to know her through mutual friends. She competed on the varsity swim and soccer teams and was active in various pursuits in and out of school. I also knew and still occasionally talk to Bea. Her name has been changed even though it has been widely reported.

I remember attending Sarah’s funeral and basically believing what was reported in the news and the light gossip amongst my fellow classmates. What was more intriguing was the crossroads at which I found Sarah, Bea and this other woman (Penny) almost three years after we graduated high school. Even growing up in a neighborhood where multiple lifestyles co-exist with hardly an eyebrow raised, it brought home the point that my classmates and I were all growing up and taking divergent paths to get to wherever we wanted to be.

I was mostly surprised to hear initially, and on reading later police reports, accounts, and news reports, that on the night she disappeared, that Sarah had been out binge drinking. I knew her to be a shy person, not a partier, and in talking with friends then and now they would confirm this. I didn’t know that much about Bea and her proclivities, but I made no judgment; I only had sadness for the difficult position she must be in.

Yes, Sarah was shy. She lived at home and was a serious student at UW-Madison, but was taking some time off for financial reasons. She went to church at Bethel Lutheran with her mother every Sunday. She rarely colored outside the lines. But in February 1994, she turned 21, and it was likely just her second time consuming any great quantity of alcohol. Sarah had celebrated her 21st birthday in the weeks before with friends, including Bea, but Penny had not been able to attend that gathering.

It was reported that Penny and Sarah had never hung out together alone, yet Penny showed up unannounced at Sarah’s mother’s house on the evening of March 14. Penny had left work early and had not been able to convince any of her co-workers to join her for a night on the town. That brought her to Sarah, telling LGBT magazine The Advocate, “I knew Sarah didn’t have a job, wasn’t going to school or anything, so I figured, she’ll go”.

A friend of Sarah’s theorizes that Penny may have suggested a night of drinking to celebrate her 21st as a pretense, but it also could have been just that, a night on the town that any young person might want to have. Bea had been sick off and on and was not able to join Sarah and Penny that night.

No reports I have read have suggested that the missed birthday bar-hopping date was a pretense for murder. Mostly, Sarah’s friends say Sarah’s partying lifestyle as portrayed in media following her disappearance and murder was a misrepresentation of who she was. They say her life was much more muted.

The pub crawl that circled Madison

Due to Sarah’s older siblings and her mom all sharing a car, she never learned how to drive, since access to the vehicle was at a premium. When she wanted to go somewhere she would need a ride, whether by car, or by bus, which was often the case.

The bar-hopping route Brummer described to police was a circuitous one. With a 12-pack of beer in her car, Penny picked Sarah up at her mother’s house and they started at Wonder’s Pub on Atwood Avenue and worked their way west. After Wonder’s it was a bar on Regent Street, then Paul’s Speedway Bar & Grill on the far West Side, before, as Penny tells it, her night with Sarah ended back on the East Side at Club 3054 after driving around Lake Mendota, stopping on the north side of the lake to urinate in the woods. 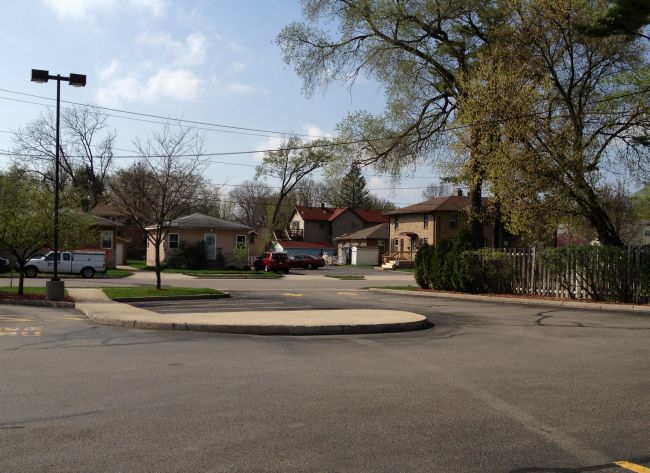 According to Brummer, Sarah Gonstead was dropped off behind Club 3054 and walked through the Gerhardt’s lot, across Oak Street to the block apartment building behind the white shed seen in the distance. The motor home where “The Outlaws” might have been hanging out was parked along a fence at the location of the green shrubs seen in this photo. Both Gerhardt’s Sporting Center and Club 3054 have since been demolished.

Penny told police that after dropping Sarah off, she drove back through town and west to Spring Green where she lived with her mother, taking in an episode of Jerry Springer by about 1:30 a.m. She also showered and washed her clothes because she claimed she spilled beer down her arm at Club 3054.

One critical part of the story Penny didn’t tell police the first time was that they had also stopped at Jake’s Bar & Grill on Mineral Point Road, which is just two miles directly east of where Sarah’s body was found. A Jake’s bartender told police she remembers seeing Brummer there that night with “a young woman”. They stayed for about 90 minutes and then left before 1 a.m.

Bea worked second shift and likely was not at her apartment at the time Brummer said she dropped Sarah off at the Club 3054, around 11 p.m., and Sarah did not have a key to the apartment. Yet Brummer told police that’s where Sarah wanted to go – even though by her own explanation of the route that took them to the night club parking lot, they would have driven past Sarah’s own home on the north side of town, some two miles from where she was allegedly last seen.

Penny has said that Sarah had eight or nine drinks and wasn’t feeling well. But why would she insist on going to Bea’s house instead of going to her own home, where they had supposedly begun their alcohol-fueled tour of Madison?

It is just a short walk from the rear of the Club 3054 parking lot that it shared with a Gerhardt’s Sporting Center, across Oak Street to Bea’s apartment. Brummer told police she saw Sarah talking to some people in the Taco Bell parking lot when Penny left the area. According to Truth in Justice, which has advocated for Brummer’s innocence, at the time there was a motor home belonging to “The Outlaws” (a motorcycle group) parked against the back fence of Gerhardt’s.

Because Sarah couldn’t drive, there was a chance that she lingered at Taco Bell to wait for the northbound “C” bus, which would have taken her home. However, the bus stop on Oak Street is much closer to East Washington Avenue than where the bikers supposedly would have been standing. The odds seem long that at that time of night, in March, a group of bikers would be standing outside, and that Sarah would strike up a conversation with them. 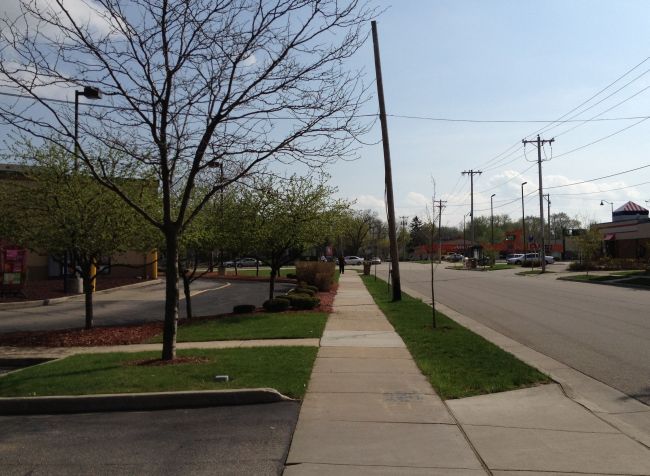 A view of the bus stop in the distance where Sarah could have caught a bus home. The motor home that may have been used by “The Outlaws” motorcycle group was located at the approximate position this photo was taken. At the time of the murder, an older version of the Taco Bell restaurant was located closer to the sidewalk adjacent to the bus stop.

For those who knew Sarah, Brummer’s story of what they did that night seems at odds with Sarah’s own previous experiences and limits. A night of binge drinking for Sarah seems to approach the implausible; not wanting to go straight home to her mother’s house once she started feeling sick, stopping to urinate in the woods instead of at a gas station or public restroom, and making new friends in a dark parking lot late on a cold night when the warmth of a friend’s residence was only a short walk away are a lot of “new behaviors” for one person, all in one night.

My personal connection to Sarah does not give me any great insight into Brummer’s guilt or innocence. Before I decided to write about this, I spoke with my fellow classmates, who confirmed my initial thoughts about Sarah as a person, versus some of her behaviors that night. As newly minted 21-year-olds, many of us go a little crazy, but Sarah’s activities as described by Penny seemed a little beyond what Sarah, intoxication aside, would have allowed herself to do.

A rebuffed lover can trigger powerful emotions and actions. This case, however, is fraught with inconsistencies. The detectives’ possible “tunnel vision” in pursuing leads that mostly involved Brummer, plus the prosecutors’ reliance on a dubious witness during the trial, has cast some doubt. At the very least, it has caused enough of a distraction from what one friend of Gonstead’s said is a case where the circumstantial evidence is “so thick”.

Even with new DNA testing ordered, I’m not sure it will be enough to force a new trial. Penny is relying on science to change the game. For Sarah’s friends and family, the evidence of Brummers’ guilt lies partly in the Sarah they knew, not the one described by Penny. I fear, as is many times the case, the truth lies somewhere in between.

Editor’s note: I plan to revisit this topic when results of the DNA test are announced, including a closer examination of key points in the case that suggest Penny’s story should be believed.

Please read Wisconsin State Journal Reporter Phil Brinkman’s excellent six-part series on this case written in 2005, the same year new attention was brought to the case by the book mentioned above and a second look by the Wisconsin Innocence Project.

6 thoughts on “Will DNA Save Penny Brummer?”