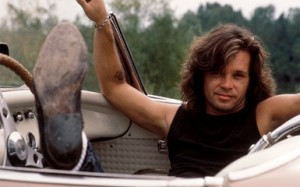 I used to fly pharmacy employees regularly to Seymour, Indiana where John Mellencamp was born and raised. The manager of the business that serviced visiting private aircraft was also an asphalt paver and contractor in this southern Indiana town and gave us (me and the other pilot) a tour one day.

We saw many things including Mellencamp’s two-story brick home located off the road. You could tell he was from a small town because it was built with Midwestern sensibility with just a whiff of stately panache.

Seymour, Indiana has quite a contrasted history which in no small way may have shaped Mellencamp’s beliefs and drove his song writing. It is a typical iron-flat Indiana town that supported the area farms with mill facilities and was known as the “Crossroads of America” for the rail lines that entered the town from every cardinal direction.

Our tour guide also showed us the “Pink House” which was not pink but grey and was a one-story almost ranch, barley distinguishable from the others on the street, which informs and validates the powerful lyrics of the song.

As we visited each house our guide felt perfectly comfortable pulling into the driveway for as long as it was needed to tell the stories of these locations. It is another legitimate endorsement of the small town where more likely than not, neighbors still talk to each other and don’t feel the need for “Stand Your Ground” laws and other compartmentalizations of society. 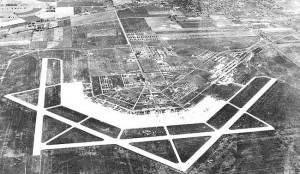 In World War II, Seymour was home to Freeman Army Air Field where it was commissioned as a pilot training base. The base also offered helicopter training to military personnel when this type of aircraft was just in its operational infancy. One other interesting fact is that the field was a repository and testing and evaluation facility for captured Axis aircraft and thus there must have been many interesting sights in the skies above Seymour during that time.

In 1945, Freeman Field was designated to train two squadrons of African-American B-25 Bomber pilots. The arrival of the black airmen led to a watershed moment that likely helped precipitate the racial integration of the U.S. Military a few years later.

Three airmen, in a move to protest segregation of the officer’s clubs on base, eventually touched off a large brawl the day after those three were arrested when nearly 60 additional black airmen tried to enter the whites only Officer’s Club. Sixty officers were arrested and the unit commander drafted a new rule upholding the segregation and the black officers were asked to “sign and acknowledge” this. 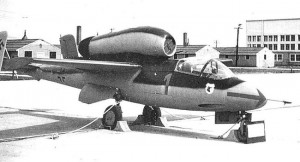 A Heinkel He-162, one of the many goofy Axis aircraft brought to Freeman following their capture. Courtesy: Wikipedia.org

One hundred officers refused and they were arrested and held for court martial before eventual public pressure secured the release of all but the original three. Ultimately, only one was tried and convicted and fined for the equivalent of assaulting a police officer.

Whether Mellencamp was inspired at all by the social upheaval he no doubt heard about while growing up in Seymour; he doesn’t like his songs being used by conservatives to inspire support from voters. Merlis says that “Small Town” and “Pink Houses” are frequently used Mellencamp songs by politicians, including Republican Presidential Nominee John McCain who Mellencamp asked to stop using “Our Country” during his 2008 run.

“More often than not it’s right wing candidates who use his songs, which is somewhat paradoxical,” Merlis told the Associated Press.

McCain stopped using the song; let’s hope Walker stops soiling the memory and symbology of this working class anthem too.