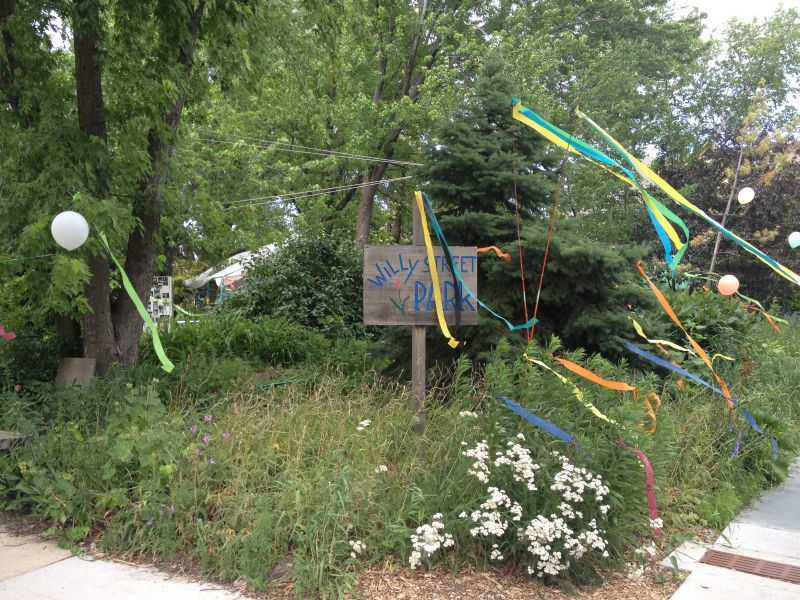 The Willy Street Park has been a green refuge just off the street for over 30 years.

Over 30 years ago the owner of a small parcel of land on the corner of Williamson and Brearly Streets started building a Taco Johns restaurant.  Horrified by the prospect of a nondescript fast food establishment clashing with the fabric of the neighborhood the local community organized against it and the building was never completed. In its place grew the Willy Street Park, a welcome patch of green space along Williamson that has been operated by an all-volunteer corporation; tending to the gardens, flower beds, and trees while making constant improvements.

On Sunday (June 3) the Park held a Thank You Party for the neighborhood complete with ice cream, juggling, and music. Last year the park was facing a tough future as expensive street assessments by the city for the reconstruction of Williamson Street threatened to overwhelm the park’s budget. The Willy Street Park Society Incorporated reached out to the community and several hundred individuals and corporations donated money to help pay for the assessments.

While the park has a small footprint, the space is a natural respite from the bustle of the city. The varied foliage and winding pathways pull visitors off the street and toward an earthen berm in the rear of the park where a sweeping concrete bench in the shape of a dragon is embedded in the earth.

More about the Willy Street Park can be found here.