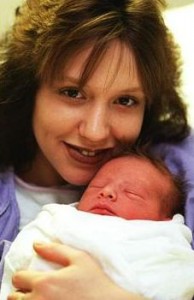 Madison Police Public Information Officer Joel DeSpain is known for his poetic re-interpretation of police reports, and some have made national news. Those of us who follow his reports on Twitter were especially struck by a report he released today (July 5) of a high-speed maternity incident that occurred last month. It reminded me of 911 audio I saved from 1998 of a baby born in the back of a Chevy Blazer in the middle of an ice storm.

In the Madison incident, a Sun Prairie, Wisconsin man was observed speeding on East Washington Avenue around 3 a.m. on June 17, 2012 and soon an officer pulled him over on south Blair Street. When it was determined that he was transporting his wife who was deep into labor the officer told him to slow down a bit but offered to follow them to the hospital.

They didn’t get far, only a short distance later on John Nolen Drive the man pulled the car over himself since the baby would wait for no one, not even a few miles more to the hosiptal. The officer donned gloves to assist but by the time she returned to the car the baby was already out. You can read the full report here.

Over a decade ago during my days working for a public radio network in Washington state; the last hour of my shift featured the excellent Canadian Broadcasting Corporation public affairs show As It Happens that I feel rivals NPR’s All Things Considered in quality of reporting. The last story one evening featured 911 audio of a man and his wife on their way to the hospital in eastern Ontario, Canada in the middle of an ice storm on the morning of January 6, 1998 while she was in the throws of labor.

This baby also did not wait and the 23 year-old mother-to-be can be heard wailing in the background as her husband is getting instructions over the phone on how to deliver the baby in the back of their Chevy Blazer, now parked by the side of the road.

The audio of the birth of Jesse James “Blazer” McKellar is worth the listen and is courtesy of the Canadian Broadcasting Corporation.

2 thoughts on “Riding in Cars With Expectant Mothers”