On the agenda is whether to install an All-Way stop sign at South Baldwin and East Wilson Streets and discussion on the City’s response to the State Office of Commissioner of Railroad’s (OCR) recommendation to close the railroad crossing at South Livingston Street.

A public hearing was held in February of this year in response to a 2009 petition by the Wisconsin & Southern Railroad to close three of the five crossings between South Blount and South Dickinson Streets. W&S proposed closing Brearly, Blount and Livingston Streets.

The heavily traveled Capital City Bike Trail is only 25 feet from the rail bed but the City of Madison says the data shows its use will hardly be impacted by the Livingston Street closure.

In that hearing, Thomas Clauder, an investigator for the OCR and Albert Klais, an expert witness called by the railroad both testified. After the hearing, the city filed two motions to disqualify both of their testimonies. The commissioner denied both motions saying Clauder as a representative of the OCR does not appear “for or against” a position.

In the case of Albert Klais, the City took issue with how he cited the Federal Highway Administration Handbook on railroad crossings in the hearing as part of his guidance for recommending the closure of the crossings. The City contends they were unfairly “surprised” by his testimony because he had not mentioned using that handbook guidance in his pre-hearing written report.

A case can be made for closing one or more crossings, but only if the railroad corridor is considered in a vacuum. Eight to ten trains use the corridor each day and can reach 1.75 miles in length with the railroad expecting to increase that frequency to as many as 15 a day in four to five years. The corridor from Dickinson to Blount is 1.06 miles with the crossings under review (Brearly, Livingston, Blount) covering a .38 mile stretch.

A 2009 survey of daily traffic by the City on those streets found a total of 3,850 vehicles per day use those crossings and 2,350 use the Patterson crossing that is located between Brearly and Livingston. The heavily traveled Capital City Bike Trail also runs near the crossings. But, despite the trail’s traffic count outstripping vehicle traffic crossing Brearly street, the City concluded that closing this crossing would not have a big impact on trail usage.

This parking lot behind the 700 block of Williamson Street will be accessible from only one direction after the closure.

In recommending a crossing closure, the FHWA Handbook suggests traffic counts should be under 2,000 vehicles a day and there should be nearby streets that offer alternative routes “without undue public convenience”. Removing the unlikely alternatives of Baldwin, Dickinson, and Blair Streets, that still leaves five crossings in a half-mile of track length with parallel streets such as Main and Willy Streets within 400 feet of the tracks. Examiner Wood in his proposed decision called this juxtaposition “a remarkably high number of crossings in a short distance”.

The decision also noted that of the two crashes that have occurred in the corridor, they both were before 1980. He also noted a negative safety benefit of each dollar spent for the installation of lighted crossing gates, which were in place at one point in the last 20 years. 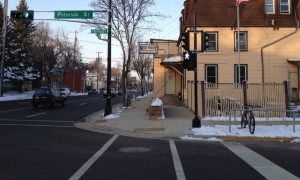 The City says closure of Livingston will only increase congestion on Willy Street since a recent major reconstruction did not account for additional left turning traffic at Patterson.

Examiner Wood concluded that the Livingston crossing was the most likely candidate due to its low volume of traffic and limited function as a north-south thruway between East Washington and Willy Street due to only right-in and right-out movements allowed at E. Washington. The City contends that the closure will force more left turns from Willy onto Patterson which already is heavily traveled and its recent reconstruction did not take into account the Livingston closure. Thus dedicated left turn lanes were not installed at Patterson and longer backups on the Willy Street could occur.

The hearing examiner ruled that W&S must pay 90 percent of the costs to close the crossing at Livingston and that the City will maintain the cul de sac’s in the future. Plans and cost estimates must be submitted by September 12, 2012 with construction of the cul de sac’s completed before June 1, 2013. The railroad must complete its part of the work after June 1, 2013 but before June 15.

In reading the proposed order there seems to be little room for changes in the decision, however the City is planning a response and will offer an update on that process at today’s meeting. On a side note, what impact will the closure have on the on-going complaints neighbors have with sound of train horns in the middle of the night?

All Way Stop for Wilson-Baldwin Streets

You may have noticed along East Wilson Street at several points between Ingersoll and Dickinson, traffic counters stretched across the road. The City’s Traffic Engineering and Parking Division (TEP) has been evaluating whether to convert the Wilson/Baldwin intersection to an all-way stop. 3,600 vehicles use Baldwin daily and 2,700 use Wilson with 67 percent of the Wilson vehicles being bicycles.

However despite the heavy use, a five year traffic study (2007-2011) showed only two crashes at that intersection and they were both in 2009. Even using the worse year as a bellwether the intersection does not meet the minimum standard for conversion to an all-way stop according to TEP’s report. 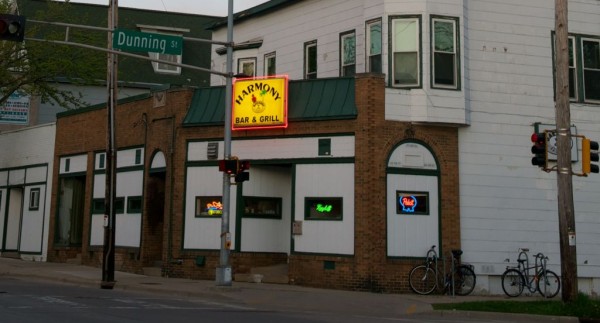 The City Pedestrian/Bicycle/Motor Vehicle Commission will also update progress on improvements to the Atwood Avenue and Dunning Street intersection. Photo by: Lea Wolf

You may have noticed very recently that the intersection of Jenifer and Baldwin Streets did graduate to an All Way stop which probably should have been done two decades ago, even if lakeside dwellers now have one extra stop on the way home.

Meanwhile nearby at Dickinson and Wilson, some have proposed that this intersection’s traffic control signs be reversed due to the high traffic on the bike trail. As a constant user of the trail its worth pursuing as the volume bicycles certainly rival if not exceed the cross-traffic. Moving the stop signs to Dickinson would increase safety for all and convenience for bicycles which are probably the greatest users of that intersection.