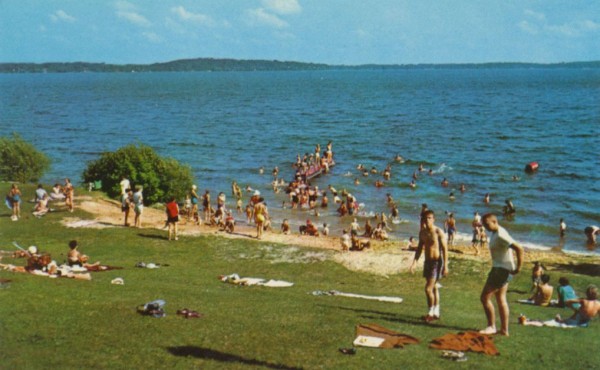 In a city known for year-round recreation probably the most sacred of activities is ice skating and swimming. It is almost a cruel irony that a community whose water-borne identity is intrinsic should have to cut back on this celebrated quality-of-life benefit.

In the Marquette neighborhood that would mean lifeguards would no longer patrol B. B. Clarke Beach which is one of the most unique swimming spots in the city. In the Atwood neighborhood, the ice rink at Olbrich park would be eliminated.

I think I was most shocked that B.B. Clarke Beach, the playground of my youth, would no longer have lifeguard service. The glaciers that formed the area lakes seemed to save its special carving work for B.B. Clarke. Its really the only beach access point in town where the water level gets deeper as you wade-in. 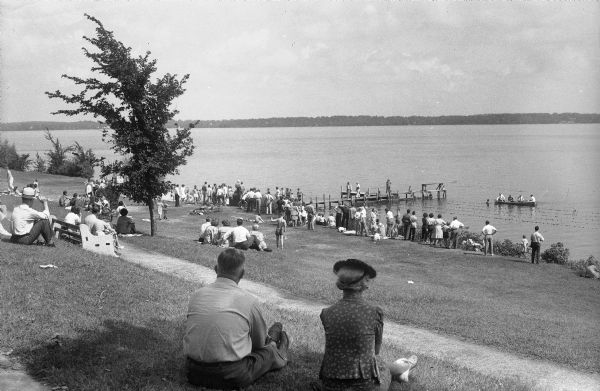 Swim meet from 1944. Note the benches in the foreground existed until only a few years ago when they were replaced by local artist Erika Koivunen.  Courtesy: Wisconsin State Historical Society

In digging through pictures of the past, the beach always was a popular spot and as early as 1951 featured some sort of platform out in the water for swimmers to use. For a time swim meets were held at the beach. But the platform is one tradition that has endured.

I’ve been going to this beach for as long as I have been alive, which for those of you keeping score is the 1970s. And in all that time there has been a diving board located around 150 yards off shore, just past the roped swimming area. Through the middle of the 1980s it was a fixed wooden platform that was painted bright red and seemed to appear every summer in early June.

It was a rite of passage for a young kid to be strong enough to pass the swimming test, administered by the lifeguard, and be allowed to swim out past that magical area past the ropes. Those who did not earn this privilege and strayed past the ropes for whatever reason would receive a prompt a whistle and a few authoritative words from the lifeguard. That voice only seemed to sound familiar if heard through the tinny filter of the city-issued bullhorn on the shelf of their elevated chair.

Just because you could pass the swim test didn’t mean that swimming to the diving board was not a challenge. The ubiquitous lake weeds that always waited just beyond the ropes seemed like an army of alien water creatures that clawed at your legs, hoping to pull you under. It was with almost equal anticipation that I waited for the city’s paddle wheeled “Weed cutters” to cut those weeds down to a depth where they wouldn’t interfere with my legs or my irrational fears. 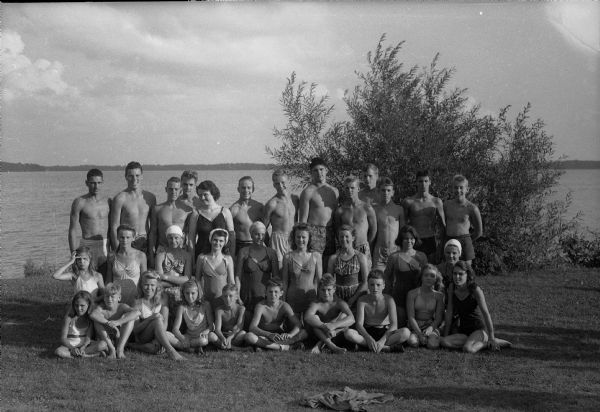 After braving some of these obstacles the platform was an oasis of fun and exclusivity. Besides the fun of jumping off, my friends and I took turns sinking to the bottom of the lake to retrieve rocks. As I mentioned, the lake actually gets deep off the shore in this area and the platform was in about 12 feet of water.

There was all kinds of learning going on as we used the platform legs to pull ourselves down to the bottom. Underwater the sound of many pleasure boats in the lake is the same as having a circular saw next to your ear. Plus, repeated rapid trips 12 feet down and up can cause real headaches.

As we always say, “Those were simpler times then.”, and to a certain extent they were. When the fixed platform was replaced by one that floats, some of the underwater fun ceased, but the diving board remained and still does. This idyllic water spot in the heart of the city is a rare living example of a tableau that often only exists for kids who live out in the country next to a quiet pond, or wooded river with a rope swing, or in the imagination of Norman Rockwell.

My memory of those days may be tinged with some of that, however the quality of those experiences are still a reality for the children in our neighborhood. Madison Parks Spokesperson Laura Whitmore was asked recently by Willy Street Blog what would happen to the diving platform if the lifeguard service cuts for B.B. Clarke become part of the final budget and she responded, “I don’t know.”

Whitmore said that Parks didn’t want to cut the entire service (lifeguards and rinks) so they moved to a strategy of regionalization. Lifeguard service will still exist at regional beaches such as Tenney where concessions and adequate parking facilities exist.

“Parking was a big factor in this decision,” Whitmore said.

In a recent Capital Times article Whitmore said the reason ice rinks where being cut back is not due to staff, but instead the cost of water. In the past, Parks has allowed volunteer groups to maintain parks facilities such as rinks and beaches. “We work with several thousand volunteers every day with proposals for projects, Whitmore said to WSB. “If there are groups that want to help with maintenance of a beach, absolutely.”

While volunteers at some of the smaller parks may become a larger part of the equation, city Alders have already proposed amendments in advance of Monday’s (October 22) Board of Estimates meeting to restore funding for the rinks and beaches. 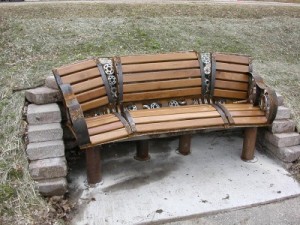 Recent reports suggest the Mayor and the City Council may have come to an agreement on restoring funding for rinks, lifeguards, and other notable cuts; however the true showdown will be over funding for the Overture Center, ambulance fees, and proposed Madison Metro fare increases.

In a recent interview with WSB, Alder Maniaci summed up best the choices faced by the city, “The lifeguards, and ice rinks are soft spots to people and they’re sort of the tip of the ice berg about the real, unfortunate choices that we’re going to be put in. We have a ton of priorities…what about the other parts of the city that are having real issues with violence and gangs and drugs?”

Editor’s Note: The Board of Estimates restored funding for lifeguards and ice rinks at its meeting on October 22, 2012. The Budget still needs final approval from the Common Council, which will likely vote on it in November.