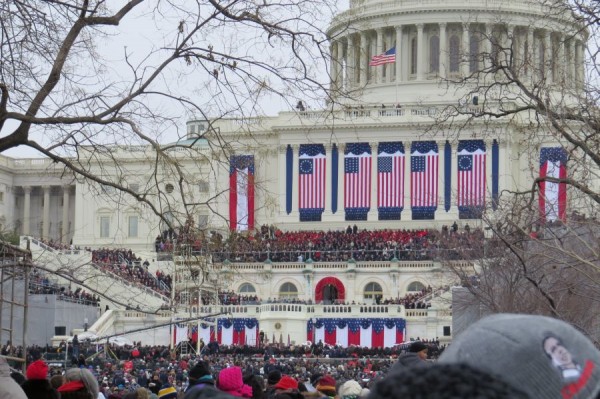 A workman-like speech was given by the re-elected President Barack Obama, however the crowd was dazzled by how enchanting the President and First Lady looked on this day. The newly acquired bangs of the First Lady were almost trumped by her fantastic overcoat.

Almost trumping it all was the stirring rendition of the national anthem, sung (and maybe lip -syched) by Beyonce, who elicited cheers when she walked down to her seat before the ceremony and roars after she finished singing.

Willy Street Blog Editors actually secured tickets to the “Green Standing Area” which was on the Capitol grounds and with-in “naked eye” viewing of the ceremony. However anti-abortion protester Rives Miller Grogan had scaled a tree near where “Green Ticket” attendees were to enter when the gates opened at 7 a.m.

According to the Washington Post, Grogan also had a Green Ticket and since the fire department couldn’t get their ladder truck close enough, police let him stay in the tree until the ceremony ended.

Grogan’s disruption of the area dew the ire of hundreds who were denied access to the ticketed area due to the security and safety situation he caused. Grogan yammered throughout the ceremony and his plaintive yelling, “Abortion is a sin” and “Ban assault weapons” could be heard from time-to-time over the amplified remarks of the planned speakers. 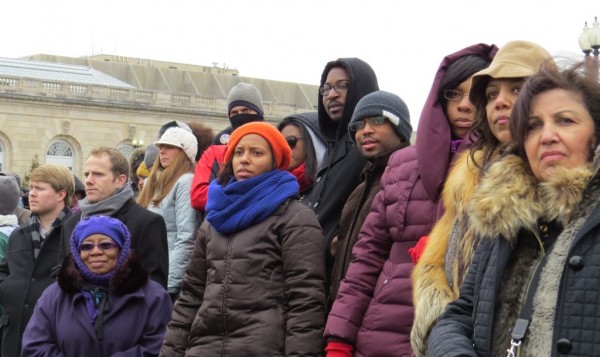 Inaugual attendees listen to President Obama speak to the nation following his swearing-in. Crowds were treated to chilly but not cold temperatures and bits of sun during the mid-day ceremony.

Apparently Grogran is known to the Capitol Police for other recent incidents such as interrupting Senate business from the gallery and disturbances in the Capitol Rotunda dating back to 2009. He has been convicted five times for his activities. and is now banned entirely from the District until his February court appearance.

Although WSB did not get as close as ticketed the general access of those passes facilitated a great alternate vantage point. We thank Wisconsin Senator Tammy Baldwin and her very accommodating staff (especially Maureen and Michael) for all the arrangements; including a short-notice personal tour of the Capitol the next day despite having to serve our state from a temporary office due to the Baldwin’s switch from the House to the Senate.