The 722 Williamson Subcommittee, part of MNA’s Preservation & Development Committee, has met several times now with BDG and last week committee chairman Bruce Woods sent a letter to Madison’s Urban Design Commission outlining their initial concerns. The letter gives no indication that BDG was planning any changes based on the discussions. What the letter does do is formalize and organize the varying concerns and plaudits that have been expressed about the design so far.

The Committee’s main issue is that the development “Does not meet the standards set by the Williamson Street Build II Plan”, which in this case refers to the proposed 10-story height of one of the residential towers. The committee also says the design raises traffic concerns, overshadows the bike path, and needs to use a better criteria for determining affordable housing. In a simpler sense the committee felt, at the moment, the deisgn was not exceptional enough to warrant exceeding the building height defined in the Build II Plan. 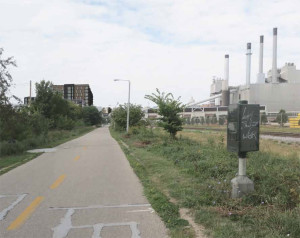 The SubComm. is concerned about the massing of the development along the bike path.

On the positive side, the committee understands the need for more central housing and density in the neighborhood. The current location is a parking lot and many feel it is underutilized and no demolition would be needed.

This is often a problem with other properties in the neighborhood where structures are often tinged with history. One other positive aspect is that the design basically maintains the industrial brick facades that dominate the 700 block.

BDG Principal Jim Bower, who lived in the neighborhood for 10 years before moving to the Tenney-Lapham, has said repeatedly that neighborhood input in the plan is key. Last month, BDG was slated to give an informal presentation to the UDC, but any comment the Commission may have made has so far been not made available by the City. BDG so far, is not listed on the agenda for the October meeting.  Bower did not respond to a request for comment on the subcommittee meetings.

The Committee is now waiting for BDG to formally present their plan to the Urban Design Commission and for that body to weigh-in on the design. Following notes from the UDC, the committee will meet weekly with BDG to continue to work on the design aspects.

The MNA P&D Committee will hold its monthly meeting at a special time and place this week to hear a presentation from BDG on three variations on the proposal based on input from the committee. The meeting will be held Wednesday October 23 at 4:30 p.m. at 9:45 East Washington Avenue. Attendees are asked to enter from the rear parking lot.

The Subcommittee letter to the UDC is posted below:

The Baldwin Group has met with the neighborhood several times and there is a plan in place to meet with them after the UDC meeting approximately once per week to work out details of the plan.  We are now looking to UDC for their take on the plan and design for this parcel.

Update [10/21/2013]: 722 Williamson Subcommittee Chairman clarified to WSB that the letter was sent to the UDC in advance of BDG’s informal presentation last month so that the Commission would know of their concerns.

This post was also changed to reflect the updated agenda of the October 23 meeting. More detail about that can be seen here.