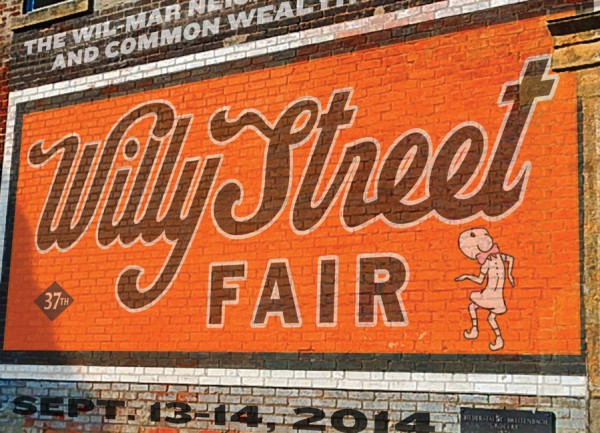 The final festival of the summer is here and just in time as fall stares at us all from off stage. The Willy Street Fair (September 13-14) is this weekend, heralding the end of a great season of celebrations within the neighborhood.

For 37 years we have gathered along several blocks of Williamson to recognize many things; but mostly the spirit of neighborhood togetherness, action and culture. While the event is a fundraiser for both Common Wealth Development and the Wil-Mar Neighborhood Center, organizer Gary Kallas says the community aspect of the fair has always come first.

“It’s more about community building, it’s more about bringing people together,” said Kallas who is Wil-Mar’s executive director. “I like to think of this as sort of secular spiritualism and it culminates the summer, the Willy Street Fair, with the grand, grand ceremony of em all the Parade on Sunday at 11 a.m.” 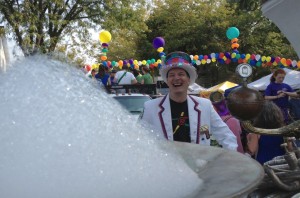 Jim Wildeman prepares to lead the parade in 2013.

Kallas said “grand” twice for emphasis adding that we all like to think that people from all over the City of Madison come to see the parade but most of the attendees and participants are from right in the neighborhood.

The Willy Street Fair is kind of two parts. The Willy Street Warm-up on Saturday where the 900 block and a portion of the 1000 block of Williamson are closed down to accommodate food and drink vendors, retail and advocacy booths as well as several music stages.

Sunday is considered the actual Willy Street Fair. As mentioned, the day is officially launched with the parade which is open to all to participate. Led by Jim Wildeman in the Bubblemobile, the route begins and ends in the 900 block of Willy but circling south on Paterson, east on Spaight, north on Ingersoll before the home stretch on Willy. 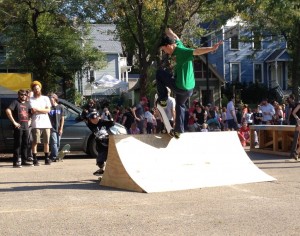 Kallas says that Wildeman only brings out his iconic white 1964 Cadillac convertible, for the fair even though over the years he has had numerous offers statewide to participate in other events.

The Bubblemobile then sits in the middle of the street for the remainder of the day with large pans of bubble soap and hoops for kids to create and revel.

On Saturday three stages will be active, the Folk stage in front of Madison Sourdough, the Main stage in the Plan B parking lot and the music fest within the fair: Willy Beats, featuring electronic music. Willy Beats will have a battle between local DJs Wyatt Agard and Mike Carlson was well as outside spinners from Oshkosh, Minneapolis, Chicago and the first-ever Madison appearance by New York City-based DJ Nature, who is profiled in the Arts Extract Podcast.

Sunday the music expands to five stages as the Culture stage near Ingersoll, the WORT Underground stage on the Struck & Irwin lot and the Kids stage in front of Heritage Credit Union join the Folk and Main stages. Saturday, the Main stage has a world beat theme while Sunday features a decidedly Latin theme including a mariachi band and finishes with Madisalsa. 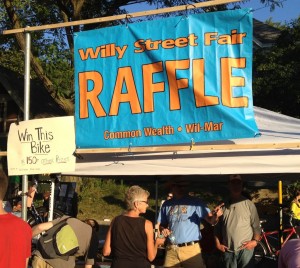 The Willy Street Fair raises funds for Common Wealth and Wil-Mar programs through sponsorships, vendor fees and the annual Willy Street Fair Raffle with nearly 200 prizes including: $1000 in cash, a Fuji bicycle, or a 1-year supply of ice cream.

According to Kallas, the proceeds from all Fair sources benefit Common Wealth’s youth programs and Wil-Mar’s youth and emergency food programs; but he adds the event is really about the neighborhood.

“The fair is about people comin’ out and meetin’ their neighbors and sayin’ ‘Hi’ and ‘How has the summer’s been? Can you believe the summers’ almost gone? What project are you going to work on this winter? And are you involved in anybody’s campaign?'” Kallas said adding that it is a big election year

Beer, wine and soft drinks along with the many food/drink cart options will be available. The Willy Street Fair runs from 2 p.m.- 9 p.m. on Saturday and 11 a.m. to 7 p.m on Sunday. Those worried about missing the Packer game, Plan B is holding a watch party on its premises.

4 thoughts on “The Grand Ceremony of Them All”