A life celebrated, a call for new thinking and actions in our everyday lives

In a service filled with prayers from clergy, gospel music flourishes accompanying some speakers and a soulful rendition of Mariah Carey’s “One Sweet Day”; most who spoke echoed Tony Robinson’s own words:

“You ever have the feeling your’e going to live forever? I mean like your’e never going to die? I’m going to be great, I don’t know how I know but I do. Just watch. I’m going to change the world.”

Tony’s Aunt Lorien Carter read a poem, imploring that his death not be classified.

“My Nephew was not a victim, simply put, victims do not survive. He is our own martyr who dwells forever in our lives…Love him now and always, a beautiful soul in mind. Cry for him now but fight for him in time,” she said. 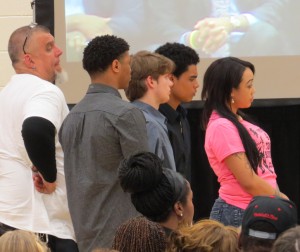 Craig Spaulding, who has said he has been kind of a second dad to Tony, spoke of how he was just turning his life around when he died.

Spaulding’s son Jack and mutual friend Julian King, who lived across the street from where Tony was temporarily living when he was shot, talked about their group of friends that made Willy Street, referred to by themselves as “The Block”, their home. Each took turns relating funny stories from the past, but at times were overcome with grief and had to pause.

Jack Spaulding finished his remarks and then placed his head on the lectern and sobbed.

Andrea Irwin and Tony Robinson, Sr., Terrell’s father, were present but did not speak during the service. Andrea and Sharon Irwin, Tony’s Grandmother, both rose repeatedly to encourage some of the speakers, many were Tony’s friends, to continue speaking after they had been overcome with emotion.

In a touching moment, Andrea came on stage to comfort Tony’s 15 year-old brother Jordan, cradling him and dabbing his eyes as he tried to get through his remarks 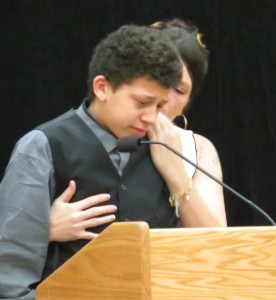 Andrea Irwin comforts her son Jordan Robinson, 15, as he speaks about his brother Tony.

Sharon Irwin, who has been vocal about Tony Robinson’s death since the early hours after the incident, was strong and resolute in her remarks.

“I know my boy isn’t over there. He’s rockin’ the universe,” she said motioning to his casket which was off to the side, adorned with white flowers.

“Last thing he said to me…’I think I got it figured out and I’m gonna take on my responsibility’…He was young, he’s black and he was beautiful.”

Carter, who now lives in New York, was adamant in assuring that Robinson’s case will not slip through the cracks in the justice system

“Anyone who stands in the way of true justice, I will make it my personal duty to expose it.” Carter said.

One of the most inspirational speakers was Tony’s Grandfather Tyrone Henry who talked of his happiness, his voracious appetite and implored all the youth gathered there to stay in school. 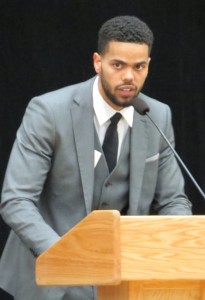 Turin Carter promised to ensure justice in Tony’s case was not compromised.

“Get your education. It’s the good things that you do in the future that you pay your respect. Many people come and say great things to me [about Tony and how they feel about his death]. I want to see your action,” he said.

“Go to school, go to school, it might seem hard now, but in the long run it will pay off.”

In talking with the people in the various concentric circles around Tony Robinson, he was a complicated, but good kid who was finally going places. His life growing up was not easy, living in various places around Madison and graduating from Sun Prairie High School.

However he was a Willy Street kid at heart and many say this was his home.

Reverend David Hart, III, a 1991 graduate of East High, gave the eulogy for Tony Robinson, referencing the depressing plot of the film Eve’s Bayou, the triumphant story of Jesus’ resurrection and words by hip hop artists Common and Nas to implore all to take charge of Tony’s narrative.

Hart, (who I credit in my previous post for helping me adjust my conscious and unconscious biases when we were friends in high school) opened his remarks by talking about his love of cinema and Bayou, but how he has no way of altering the “morose” ending narrative. 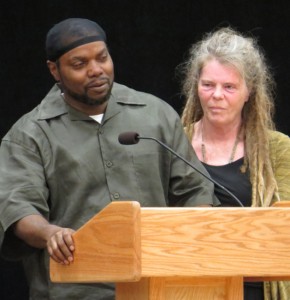 Hart then tied the cinema theme to Jesus, saying how the Romans, the police force in those days Hart noted, worked hard to kill him.

“He refused to be the black man that died in the opening credits of the horror flick y’all,” Hart said.

“Just as he was able to transform and flip the script and change the narrative from mortality to immortality, so to we commit ourselves to making sure Terrell’s life has not been in vain.”

The current narrative, as Hart said, is one of the reasons why young people of color are dying today. Our communities already have their own idea of who they really are which makes it easier for the tragic prophecy to be fulfilled, over and over again.

“We can construct a narrative that looks like young boys and girls of color that are beautiful and intelligent and bright and the world sees them through the lens that allows them to see that. And see them as them, as the people they really are rather than as monsters or as animals,” Hart said.

The legal story of what happened in the stairwell of 1125 Williamson Street on the evening of March 6, 2015 has yet to be told. But it was Hart’s words that will be one of the guiding principals for how this community will need to proceed forward from here. 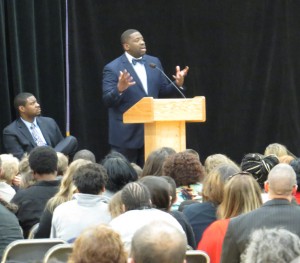 “We can create a narrative that allows them as children of color to be full participants in this community and society.

One where it can, interactive, build bridges and partnerships with their common parts of colors and races so they can make meaningful contributions to this world. We can create that narrative,” he continued.

Every time we change a policy in this world that got us in this situation in the first place. We are helping them create this narrative,” Hart said. “We can make that narrative possible Terrell..the proverb says, ‘We never forget’ then he’ll never die.” 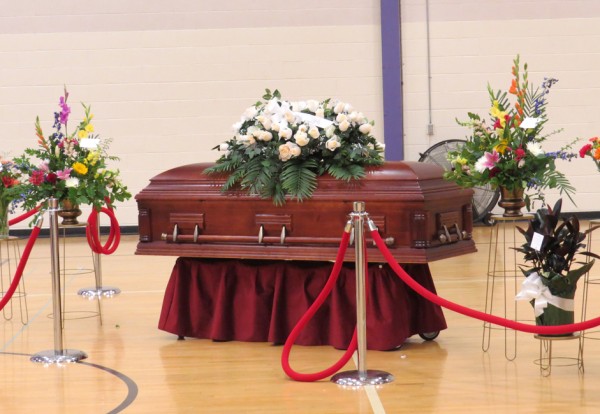 Tony Robinson’s casket was placed just to the right of the stage. A visitation was held prior to the service.

Related: Is #WillyStreet ‘A Place For All People’?

Related: A Terrorist Gave Me Lemonade