Plans submitted to Landmarks shows a layout very similar to Jolly Bob’s with seating for 40 and additional 17 at bar stools. Another eight could be seated outside. Inside capacity is shown at 74 with District Six Alder Marsha Rummel reporting a total capacity of 119. Buraka will be applying to the Alcohol Licensing Review Committee for a Class B combo liquor license with 30 percent alcohol to 65 percent food ratio.

Gib’s Bar opened in April and has received grand reviews for it’s style and patron experience. Initially, there was much concern if the conversion of this two story home would subtract from the neighborhood character after being converted to a cocktail lounge.

Strolling by the bar the other night, we can report that the project was a stunning success as the home still blends unobtrusively into the streetscape as though it was still the residence it was before. This was the intention of Owners Gilbert Altschul and Marissa Johnson (who also own Grampa’s Pizzeria), to have the bar appear as though patrons they had walked into someone’s home. 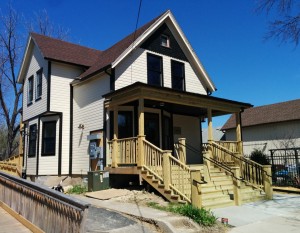 The owners of Gib’s Bar want to modify their alcohol license to allow outdoor seating in the rear and on the porch.

Now, only two months after opening, Altschul is proposing to modify his liquor license to allow outdoor seating in the rear of the building and the front porch.

When this project was first proposed in spring of 2014, MNA raised concerns about how outdoor seating would affect the relatively quiet portion of Willy Street.

Those concerns were included in an April 2014 letter to the ALRC which supported the project but with among other caveats, no outdoor seating. The ALRC included the outdoor seating restrictions in the granting of it’s license to 16 Bar Spoons, LLC which is owned by Altschul.

On additional item on the MNA P&D agenda is a request from El Sabor de Puebla, LLC. at 1133 Williamson to for a Class B Beer and Class C Wine license for their newly opened restaurant. The ratio of alcohol to food is 10 to 90 percent respectively.

The MNA P&D Committee will meet Tuesday, June 9, 2015 at 5:30 p.m in the Mendota room of Wil-Mar Center. When the applications for the changes at Buraka and Gib’s will be considered by the Plan Commission and the ALRC have yet to be determined.

Editor’s note: Willy Street Blog reached out too late to Gilbert Altschul to include his comments at press time, but we will update this post if he submits a response.