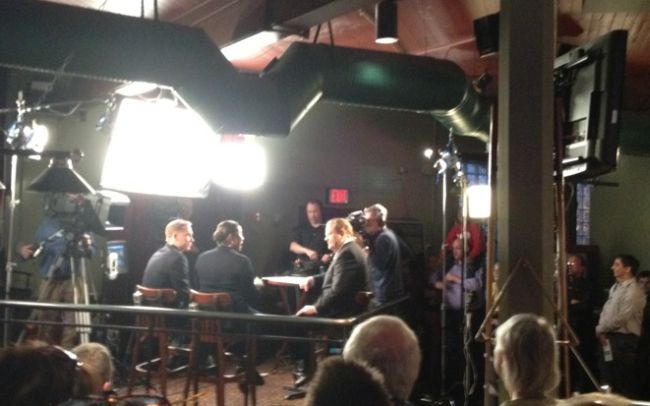 There is no doubt that Ed Schultz is in the corner of Wisconsinites that oppose FitzWalker and their GOP robot army; bringing his show to town several times last year during the Madison Spring. He returned Monday night (April 2), this time to the cozy confines of the Great Dane Pub where the voices of the movement such as Senators Lena Taylor and Chris Larson shared the discussion with witty Monty Python references and something about Mitt Romney’s zipper.

The enthusiasm seen in the streets last year was still coursing through packed audience squeezed into the main room. The lackluster interest in the WI GOP Presidential Primary was contrasted by the excitement by those in the room who were looking for a non-primary event to remind Wisconsinites the most important issue is the recall.

While the crowd was ready to cheer every word we were warned by the show’s producers to temper our enthusiasm since the first segment was about the Planned Parenthood bombing in Grand Chute, Wisconsin earlier that day. It was that moment that I noticed that Ed’s guest to talk about the incident was none other than Ruth Coniff, my high school track coach.

Since I last ran for Ruth she got a real job with The Progressive as their political editor. Ruth grew up a few blocks from me, and I first saw her on national TV during a C-SPAN program in 1997. It is nice to see the hometown talent continue to be tapped to participate in the national conversation.

I was able to take some video of Coniff’s segment so you can see what it’s like if you have never been at a live taping. I watched the show segment and my face is appropriately blocked out by my iPhone. Who knew that shaving my head that morning would make my dome especially visible on TV when I walked by in the far background.

The next segment was good old fashioned political red meat as another local favorite, The Nation’s John Nichols joined Ed on set along with The Huffington Post’s Howard Fineman for a discussion of the GOP nominating race on the eve of the Wisconsin Primary. Ed pointed out that Mitt and Paul Ryan have been seen so much together that he wondered if Ryan wanted the VP nod at the convention, and why no candidate is seeking a Walker endorsement despite his supposed Tea Party hero status.

Howard Fineman, who I think is one of the better commentators out there, lit up the crowd with some great lines comparing the GOP race to a scene from a Monty Python movie involving a knight slowly being dismembered. But they weren’t done yet as Ed played a clip of Anne Romney talking about unzipping the real Mitt. The on-camera commentators avoided the obvious joke, but that didn’t stop the crowd.

Next it was Wisconsin State Senators Chris Larson and Lena Taylor talking about the recall effort. Taylor was asked by Ed Schultz what happens if Walker wins the recall election. Taylor was quick and emphatic in her response, “First of all, he’s not gonna win.”

An interesting foreshadowing of the Democratic primary for governor is the reaction by the crowd to the mention of two of the declared candidates, Kathleen Falk and Tom Barrett who Ed interviewed on the show. It’s been no secret that the most desirable candidates (Peter Barca and Russ Feingold) are not running and talking to my neighbors, no one is really excited about who is running. Ed mentioned Falk in his setup prior to his remote interview with Barrett and only one person in the audience clapped.

Tom Barrett in the interview said he would restore collective bargaining if elected. Schultz pointed out that Barrett lost in 2010, but Barrett in his response said that the ferocity of the Tea Party contributed to his loss and that climate no longer exists. He added that people also now know what Scott Walker is about and so he predicts his chances are much better this time.

Enthusiasm was the theme Monday night in the audience of The Ed Show, and many are hoping that no matter which recall candidate the Democrats pick, that the full force that opposed ACT 10, recalled two state senators, and overwhelmingly approved a recall election, will think that additional years of Scott Walker is always the greater of any evil.