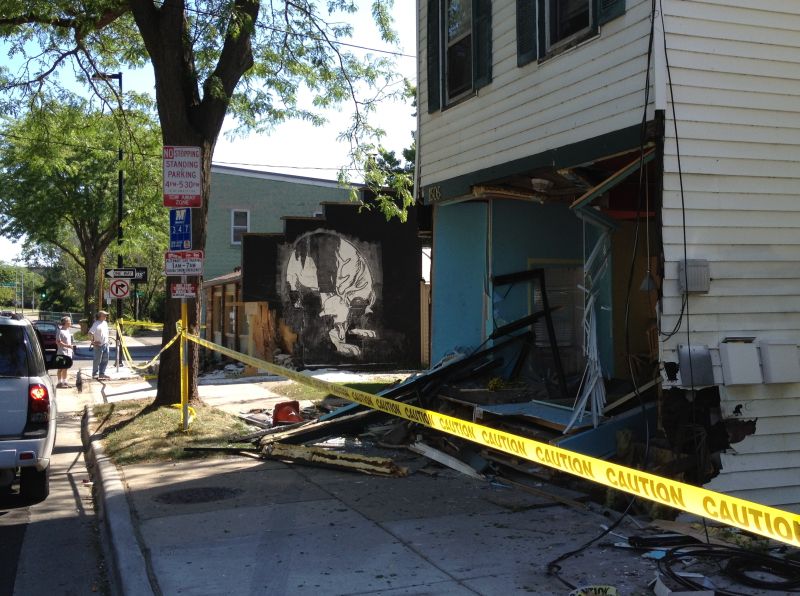 A drunk driver fleeing police crashed into an apartment building, bakery, and at least two cars in the 1500 block of Williamson Street shortly after 1 a.m. Wednesday (June 6). The driver, Christoper M. Brunetto, 29, of Fairfield, Connecticut was injured but no one else in the buildings were hurt.

Brunetto was involved in a hit-and-run minutes earlier near the Echo Bar on Bedford Street which led to the chase and crash 20 blocks later on Willy Street. Brunetto, according to a police news release will be charged with his fourth drunk driving offense. Madison.com reports that Brunetto may be a hockey goalie; related equipment was found in his car.

The driver, in a White Lexus local residents report, left the street for the sidewalk in front of Commonwealth Development Corporation at 1501 Williamson snapping off a sapling and bike rack on the sidewalk. The car then sheered off the front of 1505 Williamson which was a storefront converted to an apartment. Residents who were on the scene said a woman may have been sleeping in a back bedroom at the time.

As the car was taking out the building it grazed a sizable tree between the sidewalk and the street and then plowed into a car and the corner of the Batch Bakehouse at 1511 Williamson. No workers in the bakery were injured but the cinderblock sidewall was heavily damaged and the fire department had to install temporary supports for the roof.

One resident across the street said he heard a “bang” followed by several rapid bangs then he heard police yelling at the driver to put his hands up. The car ended up perpendicular to the street with its rear pointing outward. A car next to the bakery and one out in front were damaged. The car of the woman in the apartment was untouched.