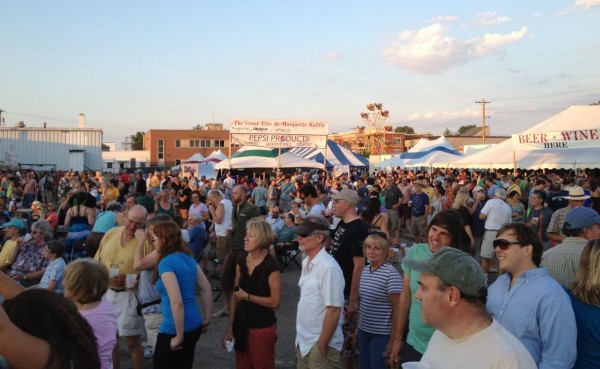 Perfect weather made for a great opening night to La Fete de Marquette 2012. Curley Taylor and Zydeco Trouble, plus Sarazino got the crowd dancing.

The first day of La Fete de Marquette was a nice mix of community, fun, and music. It was the perfect night to start a 4-day music festival with temperatures in the mid-70s, no wind and clear skies. The Willy Street Co-op held their annual membership meeting on the grounds, offering a free dinner to members, while also reporting on the state of the Co-op 18 months after opening Willy West in Middleton.

While it was difficult to discern members from festival goers, the Co-op did offer free gift bags to the first 1000 members to show up and they were gone in short order. Willy Street Co-op representative Brendon Smith estimates over 4,000 members attended with several hundred under the Beer and Wine tent to participate in the membership meeting.

Willy Street Co-op Board President George Hoffheimer, in an interview with Willy Street Blog, noted what impact the Co-op has had on the community, “We’re kind of able to bring all these people together on a Thursday evening which is a good sign that we are engaged in the community.” 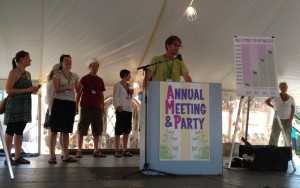 In remarks to the membership, Hoffheimer said the board will be focusing on three major initiatives: sustainability, financial accessibility, and food system development. He also said the board would be asking for more money to fund a $2.5 million remodeling of the Willy East store which will begin this fall, with the largest portion of the project being completed next year.

Additionally, the board is seeking two bylaws changes and Hoffheimer reminded everyone to vote in the upcoming board election where 14 candidates are vying for four openings. Voting starts in August.

Anya Firszt, general manager of the Co-op offered a robust view of the financial health of the Co-op, announcing that they had returned to profitability following the Willy West opening two years ahead of forecast.

“You are the owners of a successful business. All 29,000 of you are part owners of business that has grown faster than anticipated, and had grown within the top 10 co-ops in the country,” Firszt said in remarks to the membership. “Rumor has it we are the fourth largest co-op in the country.” 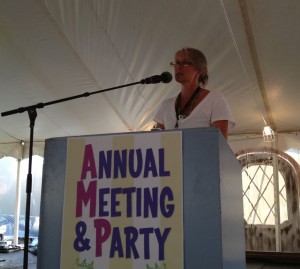 Co-op General Manager Anya Firszt said the Co-op has become one of the top 10 in the nation.

Firszt presented some figures from fiscal year 2012 (first year of the two-store operation) relating the performance of the Co-op before and after the opening of Willy West in November 2010. The membership increased from 21,000 to 29,000, staff nearly doubled to 290, and 1.15 million sales transactions were recorded; resulting in $34.7 million in sales for the year.

The Willy Street Co-op continues to focus on local purchasing and community investment with $2.5 million in goods and services from local and regional cooperatives including nearly doubling produce purchasing to $900,000 for the year. Through the Excess Discount program the Co-op distributed $226,000 to 1480 participants, an increase of 35 percent.

Through the Co-op’s Community Investment Program $25,000 was contributed to qualified Not-For-Profits and $56,000 to neighborhood and community organizations such as the Wil-Mar Neighborhood Center to help hold events like La Fete de Marquette. Finally, the Community CHIP program where members can add 1 percent to their post-tax purchase, raised $201,698 for over 50 Madison and Dane County groups that work toward community improvement.

One last ray of sunshine for the Co-op, it was voted by employees as the #1 place in Madison to work for businesses with over 100 employees. Details about the bylaws changes, the board candidates, and how to vote in-person or online will be in the August issue of the Willy Street Co-op Reader.

While many were focused on the success of the co-op; the grounds was alive with activity. The ferris wheel whirred all night, the line was long for ice cream and Curley Taylor and Zydeco Trouble got people dancing early on the Main Stage. The night ended with the smooth sounds of Sarazino.