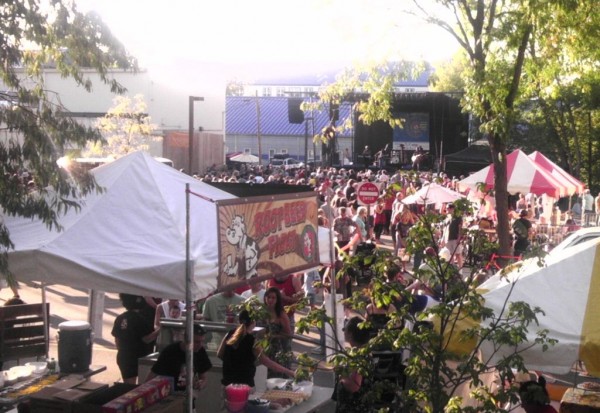 While its the people that make the Willy Street Fair so great, the weather was a close second. With a temperature near eighty degrees, thousands came to Willy Street on Saturday (September 15) for Day One of the Fair. Food, drink, and music filled the 900 and 1000 blocks of Williamson Street. The Main, Folk, and Electronic stages were in action with day-long line ups.

Today the 800 block of Willy will open to accommodate more stages including the Underground, Kids, and Culture stages. The Main and Folk stages will also have day-long line ups. If you are reading this before 11 a.m. there is still time to get to the Fair and see the famous Willy Street Fair parade. If you miss it, the Bubblemobile will be in the 900 block  after the parade for the rest of the day.

A Capoeira demonstration by Raizes do Brasil

B-Boy breakdancing demonstration as part of the Willy Street Beast line-up at the Electronic stage.

Related: See what happened on Sunday (9/16) at the Fair