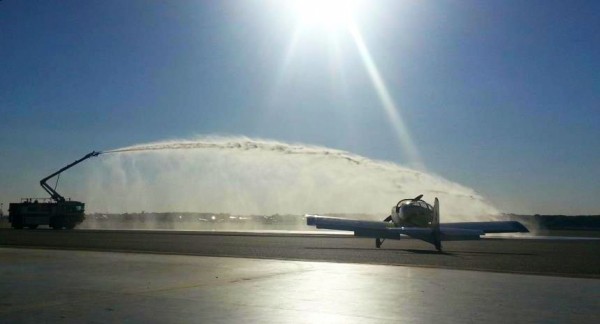 The ice cream machine was borrowed from Capitol Drive Airport where Swede spent a lot of his time enjoying both aviation and the people who came along with it. That ice cream machine had been a part of many events the Swede help put on. When it arrived at the hangar on Saturday, it was discovered that an adapter was needed to tap the 220 volts to operate the machine. 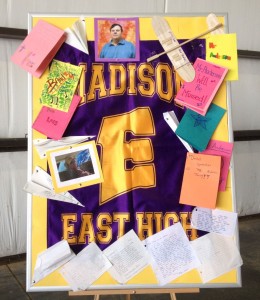 This board and one other were filled with messages from many of Erik’s aviation students at East High and his music students at Sherman Middle School.

It was said throughout the service that Swede would not have had this day go any other way. Erik liked solving problems on the spot with simple homemade solutions and there were plenty of examples of on-the-spot ingenuity to make this day happen.

One example was the need to quickly run to the hardware store to get the proper power parts for the ice cream machine; and that would have brought a smile to his face.

In addition to the food, there was a corner set up with photos of Erik and two large boards covered in personal messages made by his students both at Madison East High School and Sherman Middle School.

In the front of the hangar was a table with some of the most defining items of who Erik was. His trumpet, his Swedish-style hat, and his beautiful accordion. Also on the table was the Swede himself, encapsulated in a custom metal urn crafted by his brother Jon and his friend Gil. It was felt by those close to Erik that he be buried next to his dad in a homebuilt and it was beautiful workmanship. as Swede would say, “She’s a beaut”. 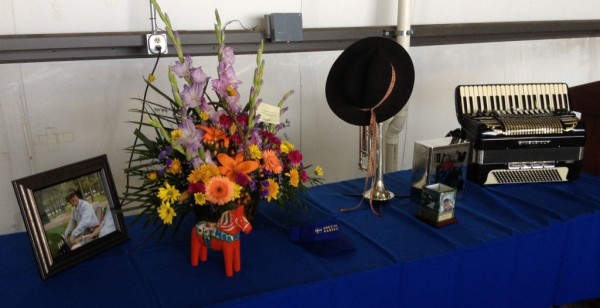 The many lives of Erik Anderson: music, aviation, education. Erik took center stage in a silver aluminum urn (center) crafted by his brother Jon and his friend Gil.

Outside, a fly-in broke out as N953BL the RV-6 that the Erik helped owner Bob Lang build was parked on the ramp for all to see as it glowed in the afternoon sun. Other friends arrived in their aircraft and soon, just like any Saturday at the airport a gaggle of airplanes were neatly parked nearby.

The service was simple, poignant, and jovial. Erik’s closest friend Eric “Weasel” Whyte emceed the ceremony interjecting wonderful anecdotes that helped introduce each of the featured speakers. Craig Henry talked of the first time he met Erik at Capitol Drive while experiencing an issue with his aircraft and impressed him with three simple words Erik said to him, “You need help?”

Joseph Coraggio had been hanging around the airport since he was a young kid. He held Erik up as a perennial mentor and devoted friend. Jeannie Schneider, a longtime friend through the EAA, talked of all the great memories of the EAA Oshkosh campground and how he guided and inspired her oldest daughter to excel as a teacher.


Erik’s main focus in life was education, whether it be in aviation, music, or just making sure young people learned to enjoy life. His outreach was evident as several dozen faculty and students from Madison East High School as well as former students were in attendance. 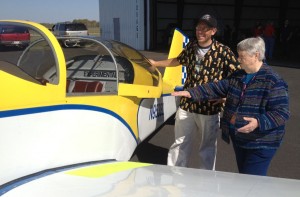 Close friend Eric Whyte with Erik’s mother Avanelle, (right) who had only seen the RV-6 fly over her home a few times. This was the first time she had seen up close the plane her son had worked on so long.

Bert Zipperer a co-worker with Erik at Sherman Middle school remembers talking with him about life in a quiet moment outside between classes a few days before he died. “He was such a great guy, and was someone who the kids felt really understood them.” said Zipperer who in the past served as Alder in Madison’s 6th District which includes portions of East High’s school population.

Darby Lemkeuil who had taken Erik’s classes for two years spoke on behalf of many of the students who knew him, “He was a reason to come to class…it was fun being around him, showing up early and just talking,” Lemkeuil said. “He always told us at the end of each class, ‘Have a day or don’t go away mad”.

Michael McArdle, the teacher who founded East’s Aviation program spoke of the process that brought Erik into the position when McArdle was planning to retire. While McArdle highlighted his aviation teaching background during the interview process; the principal at the time, Milton McPike, was impressed with his habit of meeting the students at the buses at the beginning of the day.

Erik was extremely fond of music and it was a big part of his family’s life. He was so taken with Scandanavian music that he learned the accordion just so he could play it and helped start the band Lekspel. ‘L’ for Lisa, ‘E’ for Erik, ‘K’ for Kent. Spel is Swedish for “play”. At the service two members of Lekspel; Paul Grevsmeuhl a guitarist, and Mary Stetson Norquist on violin played a traditional Scandanvian song.

The service ended with Erik’s brothers Jon and Nils thanking the many people who had expressed their admiration for their brother. They also thanked Wisconsin Aviation for providing the space for the service and the staff support to help make the event run smoothly. Nils ended the remarks with a saying the Swede always used when it was time to move on, “…and we go from there.”

Several hundred attended the memorial service for Kjell Erik Anderson at the Dane County Regional Airport. On the right is the ubiquitous ice cream machine. In the foreground in the vest is Jeff Davis, a Wisconsin Aviation employee who moved mountains to ensure the event went off well. Truax Field Firefighter Charlie Porter who provided the water cannon tribute is on the left in blue.

In the past when members of Swede’s aviation community had died, the Swede was called upon to play Taps at the end of the service. On this day no trumpeter was available which led to the improvisation that Swede so dearly loved. For Taps, Mary stepped in and played the stoic tune on her violin.

As Mary was playing inside, a water cannon salute from a Truax Field Fire Department fire truck (firefighter Charlie Porter volunteered with Erik at EAA Radio) arced over Erik and Bob’s RV-6. In the background an airliner was departing into the deep blue September sky, its turbine rumble mixing perfectly with the violin.

I think the Swede would have summed up the day best with a trademark phrase whenever a perfect day of aviation had occurred, “She was a hoot.”

Editor’s note: We hope to build on the video and photo gallery above. If you attended Erik’s memorial service please consider sharing any images by emailing us here