The 2012 MNA Membership Meeting was held at Marquette Elementary on October 18, 2012.

The Marquette Neighborhood Association Membership Meeting this past Thursday (October 18) was a celebration of both robust participation and an infusion of new blood. An estimated 50 members attended the meeting which included approval of the budget, election of new board members, awards, a presentation from Downtown Madison Incorporated (DMI), and a farewell from outgoing President Scott Thornton.

Before reflecting on his tenure as president, Thornton noted that the attendance at the meeting seemed to be the largest he has ever seen at a membership meeting. Present were stalwarts from the beginning of the organization as well as many new faces. Many enthusiastically ratified the work Thornton has done for the organization with a standing ovation. 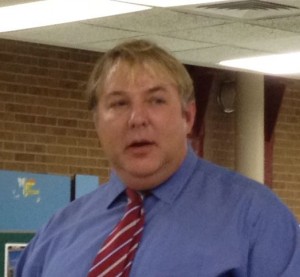 For his part, Scott Thornton, his voice slightly wavering at times, recounted the many projects he was involved with during his 4-year tenure on the board, such as the neighborhood arts initiative in which he seemed most proud.

He also presided over an increase in membership, the MNA achieving 501(c)(3) tax exempt status, and the improvement and reconstruction of Willy Street.

“While I may no longer be on the board, I will continue to look for ways to promote the health of our neighborhood and protect the quality of life that we enjoy here.” Thornton said.

When Thornton announced his resignation from the board approximately two months ago (effective at the October meeting) there was instant speculation it was in part because he was interested in running for 6th District Alder. To this date Thornton has not indicated what his future plans would be in the neighborhood other than to see the current arts initiatives through.

In recognition of individual efforts for the neighborhood throughout the year, MNA bestowed Good Neighbor Awards on Sharon Kilfoy for spearheading MNA’s Art and Culture Committee including the new mural on the west side of the Willy Street Co-op.

Lee gave a short acceptance speech drawing some interesting contrasts between the retail business his family had in his hometown of Flint, Michigan and Ground Zero which he operates with his brother Lynn Lee. 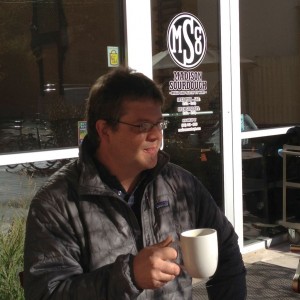 “It’s really and honor to be a part of this neighborhood. It’s really and inspiration, there is so much creativity. I feed off that creativity and I enjoy coming to work every day.” Lohrentz said.

The keynote was given by DMI President Susan Schmitz who recalled many of the lessons her organization learned about growing downtown Madison in the 16 years she has served as president. Schmitz praised MNA and the Marquette neighborhood as a highly engaged community, which will help as it continues to chart the future course for the neighborhood and especially Willy Street.

Schmitz’s specific focus Thursday was on retail districts and some of the strategies DMI has employed on State Street, particularly with the redevelopment of Elizabeth Link Peace Park.

One key take away they learned while designing the park, and she noted it applies to all their wider strategies; is to figure out who are you trying to attract, who is going to spend money or time, how far away do you hope to draw people from etc., before embarking on any specific design work.

“After we took the time to figure out the purpose [of the park], it took two weeks to finalize a design.” said Schmitz.

Schmitz also encouraged the continued use of Business Improvement Districts (BID), which have already been employed in the neighborhood in the past. Schmitz says BIDs are a great way to target improvements that have the approval of residents and property owners in the immediate area. 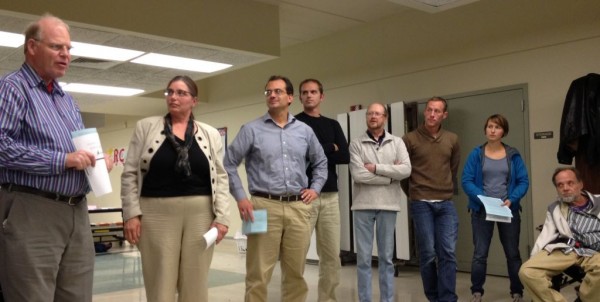 The Membership Meeting is also a time to elect MNA Board members to two-year terms to the twelve member board. Ten candidates were running for seven seats with three running for re-election. Each candidate submitted a written statement which was distributed before the meeting through various avenues including the MNA email listserv and were also on the ballots provided at the meeting. After brief speeches, ballots were cast by the membership present. 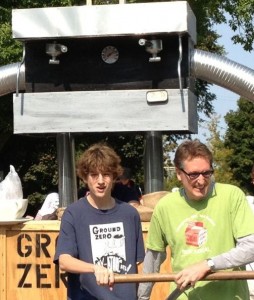 Lindsey Lee (right) with one of his sons in the 2012 Willy Street Fair Parade.

Carl Durocher, Micheal Jacob, and Todd Jensen are returning board members, while the rest will be serving their first terms, however all are very active in the neighborhood. Not re-elected were Cory Gresen and Bill Scanlon who join departing board member Julie Spears.

Of note, the position of President is currently unoccupied and Thornton issued a call at the meeting for members to join the many MNA committees, all of which need volunteers. One does not need to be member of the Board to join.

The final act of business was to approve the budget for the coming year. Actual expenses for the 2011-12 budget year came in approximately $5,000 under budget. MNA proposed increasing the 2012-13 budget by $18,000 excluding the festivals. Income from all sources last year eclipsed the budgeted amount by $35,000 as a total of $70,000 in revenue was collected with $67,000 coming from festival proceeds. Currently cash reserves sit at $105, 000 with budgeted reserves for the coming year at $94,000

The budget was approved by the membership by a unanimous voice vote.

Like this article? Prevent Carpal Tunnel by having new posts delivered directly to you by signing up for email delivery. Click here and sign-up on the right-hand side of the page.