Boosters of an east Isthmus location for the City’s Public Market hope continuing plans for Central Park will enhance its prospects of locating nearby.

The City of Madison is proceeding with plans for a Public Market, something Mayor Paul Soglin has been advocating since the summer. Former Mayor Dave Cieslewicz has also been bullish on a market, but has insisted that it be located downtown.

Public Markets are much like farmer’s markets except they are open most days of the week and are enclosed to fair degree if not entirely. Now with a City committee developing a plan backed by a $1.2 million budget, a petition created by the Eastside residents hopes to encourage the City to locate the market on the Eastside.

Mayor Soglin, after touring other Public Markets across the country is against a downtown location saying there lacks a location, such as an old warehouse, to revitalize which solves both a blight problem and saves costs of new building. Soglin, in comments to the Isthmus in July, said that a market outside of downtown would have lower rents, spur economic growth and provide better access to food in poorer neighborhoods.

Access to fresh food in Madison’s poorer neighborhoods has been a growing problem lately. Following the closing of Cub Foods on Verona Road in 2009, more and more residents in the Allied Drive neighborhood were forced to shop at nearby gas stations or Walgreens. Both outlets have a limited selection of food and at much higher prices which tend to tax the limited budgets of area residents.

This past June a private effort led by Fresh Madison Market owner Jeff Maurer began bringing more fresh foods to these neighborhoods through their Freshmobile Initiative. The mobile market aimed to provide fresh fruits and vegetables, milk and dairy products, and other healthy alternatives to the areas it visited in Dane county 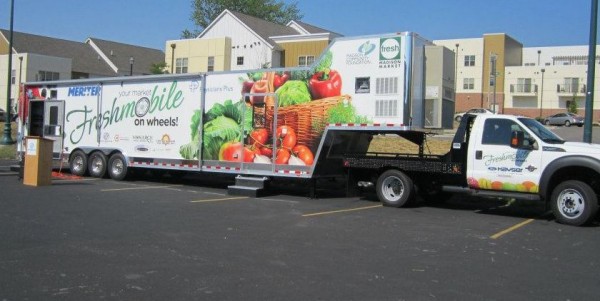 For these reasons Soglin would prefer the market be located on Park Street, Sherman Avenue, or near Central Park on the near-Eastside. According Eastside resident Joe Mingle the Committee does not want to make it a tourist destination and will likely not recommend locating the market downtown.

Mingle wrote to Eastside neighborhood residents urging them to view the petition and sign if they support a Public Market on the east Isthmus. What influence the petition will have with the Committee is unknown but Mingle hopes to gather at least 1000 signatures.

You can view the petition here