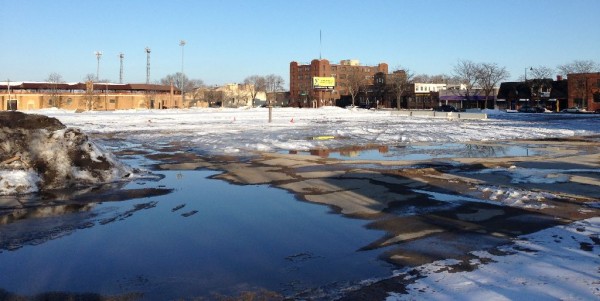 The failed first attempt at developing the site was a sigh of relief to many residents of the Tenney-Lapham neighborhood, and to a certain extent those in the Marquette neighborhood, who were excited about a late (but not considered) proposal by Metcalfe’s Market for a mixed-used development including a grocer, hotel, and apartments. As the 800 North Block East Washington Avenue Committee prepares to consider submissions from T. Wall Enterprises, C.D. Smith, and Gebhardt Development one proposal is emerging as a clear favorite.

The Metcalfe’s proposal was much more in line with both the 2008 Capitol Better Urban Infill Development (BUILD) Plan and the Tenney-Lapham Neighborhood Plan (both adopted in 2008) which favored community mixed-use developments along East Washington and Medium Density Residential along East Mifflin Street. The new RFP issued by the City in December of last year reflected this desire as well, and the current proposals seem to embrace it with gusto.

A gateway to Madison

Frequent travelers on East Washington Avenue have endured what seemed like an endless but necessary rebuild of the street. The result is a fresh, welcoming boulevard with updated signage and a wider right of way. The BUILD plan also envisioned that future buildings would help create “…an inviting and vibrant boulevard” in the gateway zone from First to Blair Street. 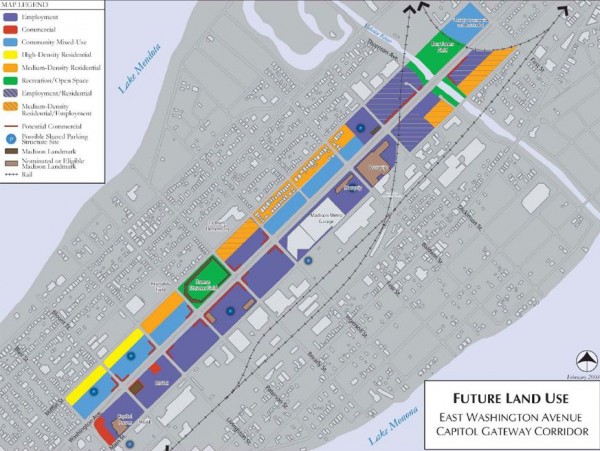 The Capitol BUILD Plan Land Use map which shows ideal types of uses for each parcel in the corridor. The north 800 block of East Washington is slated for community mixed-use. Courtesy: City of Madison

The plan also called for any future development to protect the view of the Capitol, respect and strengthen the adjoining neighborhoods and establish the corridor as an employment center supported by transit.

Potential employment uses in the zone include: incubator start-ups and accelerators, design/creative centers, food-related businesses, and a Wisconsin Gateway/showcase firm like a trade organization or corporation with state or national status that would need access to the government quarter.

Specific to the 800 block were requirements the neighborhood and the City sought regarding housing, traffic patterns for commercial vehicles, sun access and Capitol views, utilization of park land and anticipation of further development of Breese Stevens Field. The latter, which the City plans to develop into a vibrant athletic facility, required each proposal to address how the development would tie into the stadium. 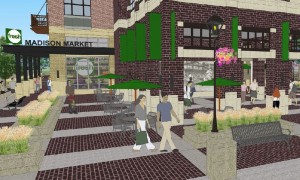 The RFP states, “There is significant interest in the neighborhood in the development of a full service grocery store.”

The Willy Street Co-op East and Jenifer Street Market have been stalwart food outlets in the area for decades, but they are inherently niche in style and don’t have it all. One poster said as much on a neighborhood listserv during a discussion of whether the area could support a third store.

“I’m sure I’ll continue to frequent Jeni [Jenifer Street Market] for the basics, Willi [Willy Street Co-op East] for bulk grains, spices, etc. And of course the Sunday North Side and/or Tuesday farmers market for the veggies/organic meats. I never was one for going to just one store. A full service store added to the mix would be much appreciated for the water softener salt, 24-count toilet paper and what not.”

All three current proposals integrate a grocery store, with two proposing a 35,000 square-foot Fresh Madison Market and one a 50,000 square-foot Metcalfe’s Market. At least one proposal includes a rooftop farm that will supply some of the store’s product.

The “Tenney Town Center” design is the most direct attempt to blend with the City’s intentions to ramp up sports activity at Breese Stevens Field, a walled stadium across Paterson Street. This view shows the grand residential entrance at the corner of Mifflin and Paterson streets. Courtesy: T. Wall Enterprises

Terrence Wall grew up in the Tenney-Lapham neighborhood and noted in his introductory letter to the committee that he served as a crossing guard at nearby Lapham School in the 5th grade. In addition, his family was instrumental in the building of the new John Wall Family Pavilion at Tenney Park.

The T. Wall Enterprises proposal bases its theme on nostalgia, tying heavily into Breese Stevens Field with a brick-façade-style building with a stadium-inspired look on the corner of Paterson and Mifflin. The development will be anchored by a 35,000 square-foot Fresh Madison Market grocery store on the Livingston Street side, 30,000 square feet of commercial space, and 225-250 apartments. 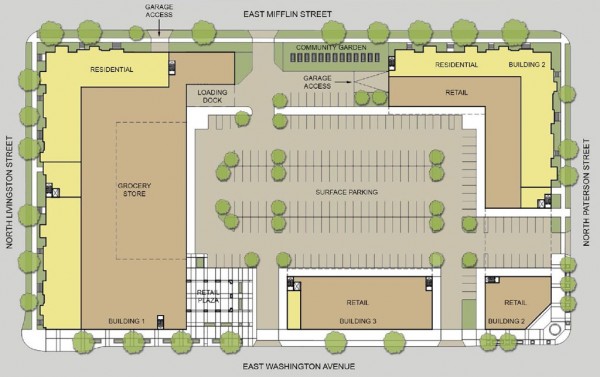 Wall hopes to right-size the development by limiting vertical construction to five floors with steel and concrete for the food store and low and mid-rise construction codes for the apartments so more money can be allotted for aesthetics. The proposal tackles the parking cost issue but limits the entire scope of the project, thus reducing the need for deep underground parking or a taller ramp.

The Wall proposal offers a large interior surface parking area for the food and retail stores and underground parking for the residents. Other features include a rooftop plaza above the Fresh Market with some gardening space and a community room. For the purposes of the proposal T. Wall Enterprises has dubbed the development Tenney Town Center.

A view of “The Hub” from the corner of Mifflin and Patertson streets. C.D. Smith created this feature as an indoor tie-in to Breese Stevens Field and gateway to a pedestrian promenade that winds its way through the block to East Washington Avenue. Courtesy: C.D. Smith Construction Services

Smith’s proposal for Block 800, dubbed Cap Center East, is a two-building approach that features a two-story 35,000 square-foot Fresh Madison Market grocery store and 4-5 story commercial and residential building. The Fresh Market will anchor the corner of Paterson and East Washington Avenue and stretch toward Mifflin Street.

The 200 residential units and 110,000 square feet of commercial and office space (with some space above the grocer) runs along East Washington Avenue, Livingston and Mifflin Streets in a rectangle with a parking ramp in the interior. Vehicle entrances to the ramp will be off Livingston and Paterson.

The C.D. Smith development as seen from the southeast. The site would hold two main structures with a multi-level parking ramp that rings the interior courtyard. Courtesy: C.D. Smith Construction Services

The proposal creates a pedestrian promenade through the center of the development, tying together public areas on East Washington and Mifflin. On the corner of Mifflin and Paterson Smith proposes “The Hub”, an activity center that ties into the Fresh Madison Market, promenade and Mifflin bike corridor. On the East Washington end of the walk-thru is a “Community Court” large enough to hold small events, gatherings, and outdoor dining.

Other green space comes in the form of elevated gardens along the promenade and a large interior courtyard within the commercial and residential section. A separate residential entrance is proposed for the corner of Mifflin and Livingston, which features walk-up townhomes along Mifflin and apartments on the floors above.

A rendering of the Gebhardt Development proposal that hits many of the notes in the City’s RFP. The design also has design flourishes found in the firm’s Constellation project (currently under contruciton) which can be seen in the background. Courtesy: Gebhardt Development

Otto Gebhardt III, having grown up in the Marquette neighborhood, may also be having pangs of nostalgia for Block 800, but his company’s proposal is probably the most complete and fresh of the three. One advantage for Gebhardt is his 12-story luxury apartment and office building Constellation, which is growing taller every day next door on the 700 block of East Washington.

Gebhardt partners with Bark Design and Eppstein Uhen Architects (partners on the C.D. Smith Union corners proposal) to create a development that seems to hit many of the key elements sought in the RFP. Drawing on sustainability techniques learned through Madison’s sister city of Freiburg, Germany, Gebhardt has integrated Passivhaus (Passive house), solar, and bike-heavy features into the site design. 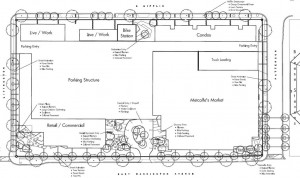 The configuration of the Gebhardt proposal puts retail and office on East Washington Avenue and residential on Mifflin and in a central high-rise tower. Courtesy: Gebhardt Development

The proposal goes vertical with the apartment housing, centers the office and commercial on East Washington Avenue and Livingston, with the passivhaus modules and live/work residences along Mifflin Street.

Gebhardt has partnered with Metcalfe’s Market for a 50,000 square-foot grocery store on the corner of Paterson and East Washington, which includes a bicycle-themed bistro named “The Handle Bar”.

Other interesting initiatives include a partnership with Sustain Dane, and the University of Wisconsin to pursue a GreenLink Centre to research and develop urban-based sustainability projects like the “Solar Info Center” in Freiburg, which allows patrons to see the technology in action.

The Gebhardt proposal also uses a multi-level parking garage in the interior of the site with ramp entrances on Paterson and Livingston and a right-in to a circular pick-up/drop-off drive off East Washington Avenue. 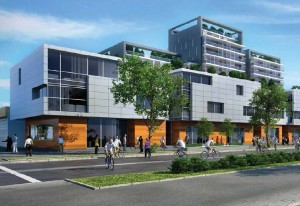 All three proposals offered up specific ways to address sustainability, including rooftop cisterns for gardening, solar panels, and adhering to LEED and Energy Star design standards.

Car charging stations or community car parking areas were also offered in two of the proposals, and Gebhardt and C.D. Smith both proposed B-Cycle stations on Mifflin Street.

While the developers worked hard to adhere to transportation requirements in keeping commercial traffic off Mifflin Street, it remains to be seen if traffic around the grocery store will become a Willy Street Co-op-type problem for Paterson, a narrow street already.

The selection committee will begin the consideration process on March 7, 2013 at 5:30 p.m. at the Madison Senior Center, with public presentations by each of the developers followed by questions from the committee. A second meeting is scheduled for March 12 with a committee recommendation to the Common Council possibly by April 4 if the process proceeds normally.

The costs of each proposal were not available, since the City requested in the RFP that financial information be submitted separately. What sunk the last attempt was Tax Incremental Financing for the parking ramp along with the proposed pace of the property development. Based on the City’s experience with The Edgewater Hotel, this seems to be a common stumbling point. 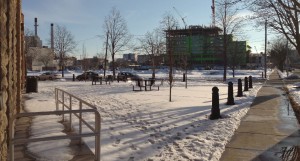 Developers were required to consider how Breese Stevens Field (in the foreground on the left) tie into their site designs. Photo by: Jamie Grunniwaldt

T. Wall’s proposal seeks to minimize this, while both C.D. Smith and Gebhardt are pursuing a multi-level parking ramp which could reach $25,000 per stall. C.D. Smith is proposing a four-level, 726-stall ramp.

The three proposals range from moderately safe to ambitious and will test the courage of the committee – and, by extension, Madison – to select the project that accomplishes the goals laid out in the Capitol East BUILD plan.

Gebhardt’s proposal certainly does that, but at what cost? At the same time, will Madison hem and haw (like in 1959 with Frank Lloyd Wright and his convention center) and settle for something less, thus failing to meet its goal of creating a gleaming gateway that also serves its residents?

We will likely find out in Madison what it means to have it all.

2 thoughts on “Nostalgia or Sizzle for Block 800”