Attack mailer against Rummel could be a first for District 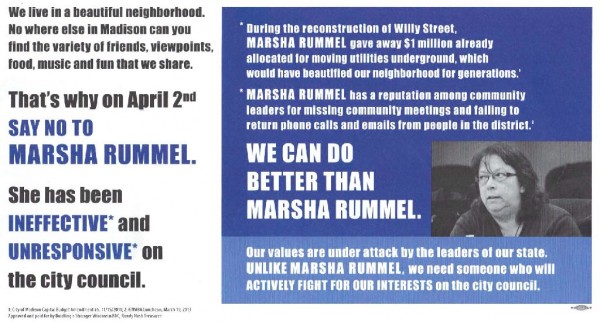 Outside political money has found its way into the District 6 Alder race. Residents reported receiving a mailer from Building a Stronger Wisconsin, a 501 (c)(4) Political Action Committee based in Waunakee; that doesn’t support a specific District 6 candidate but does take sides in the race.

The mailer attacks incumbent Marsha Rummel as “ineffective” and “unresponsive” on the Madison City Council. The mailer cites two specific examples where Rummel has disappointed saying that the district “needs someone who will actively fight for our interests”.

The first instance relates to the reconstruction of Williamson Street in 2011 and the opportunity to place utilities underground; saying Rummel voted to not fund the part of the project that would place power lines underground. The mailer also accuses Rummel of missing community meetings and not returning correspondence from district residents.

Both lines of attack are familiar as Rummel’s challenger Scott Thornton has leveled both charges at her during the race, most recently in an interview with Willy Street Blog. 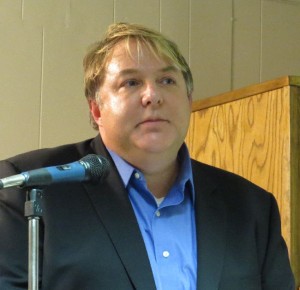 Scott Thornton at the Alder forum on March 25.

“We have to address the overhead wires. Willy Street when it was reconstructed the conduit was put in there,” said Thornton. “The Mayor earmarked a million dollars to start putting those wires underground and our Alder gave it away on the floor of the council. That’s not something I’m gonna do.”

WIliamson Street Art Center Owner Sharon Kilfoy, in a posting on a neighborhood listserv, pushed back on that assertion saying that she attended the meeting where the vote took place and Rummel had indeed pushed for money to bury power lines as part of the project but there was strong pushback during the final budgeting from Alders in other districts.

The mailer cites a Greater Williamson Area Business Association (GWABA) luncheon that was held on March 19 as the source of the other charge that Rummel missed meetings and is a poor communicator. A luncheon attendee confirmed that this point was raised by Thornton at the event which was also attended by Rummel. Thronton also made this point in his WSB interview and at the Alder forum earlier this week.

Building a Stronger Wisconsin is a bit of a mystery. A 2011 IRS filing shows the group expended approximately $59, 116 on advocacy efforts. In their filing the group lists the Edgewater Hotel as one of the initiatives they support and “the family-supporting jobs it would create, and the dedication of a strong city infrastructure the project represented”.

Mike McCabe of the Wisconsin Democracy Campaign, a group that tracks political spending in Wisconsin, forwarded to WSB this link to their site which summarizes much of Building a Stronger Wisconsin activities.

The group first started using it’s PAC in 2010 to oppose Republican candidates at the state level; however they have been in existence since 2007.

BASW’s website displays several areas of interest including: jobs, education, taxes, healthcare and infrastructure with their overall mission stated as this:

Building a Stronger Wisconsin is an independent advocacy organization whose purpose is to publicly promote policies that maintain Wisconsin’s high quality of life. Recently, the US Supreme court has told us that the best way to promote free speech is with more speech, not less. We will continue to speak up in favor of the issues that we believe will keep building a stronger Wisconsin now and into the future.”

A call to Randy Nash, who is listed as the group’s Treasurer so far has not been returned. Nash is a Milwaukee area attorney who unsuccessfully ran for State Senate in 1996 and also represented the Democratic Party of Wisconsin during the Scott Walker Recall Election.

This race has been about subtle disagreements between the candidates and no clear issue or issue has divided the electorate. It has struck many in the District as odd that an outside group would take an interest in a hyperlocal contest.

Marsha Rummel released a statement regarding the mailer (see below); a request for comment from the Scott Thornton campaign has so far not been answered. This post will be updated if WSB receives any response from BASW or the Rummel or Thornton campaigns.

Marsha Rummel responds to the mailer in this statement released to WSB:

Anonymous campaign attack ads are toxic to our local democracy. District 6 has never seen it before. Everyone I’ve talked to is shocked and appalled. Nasty tactics are most evident at state and national levels, not local city elections.

I have raised issues I see as important and shared my list of accomplishments throughout the campaign through my website, lit pieces. LWVDC statements and questionnaires for local media and organizations. My opponent has mostly talked about his credentials and his style not his vision for District 6.

I think the voters have a clear choice.

Update [1:33 p.m. CST]: Bill Scanlon, a resident who says he has worked closely with both candidates said in a comment to this post that he spoke with Scott Thornton about the mailer and this is what Thornton said to him:

Scott Thornton disavows and otherwise completely disapproves of the piece. He did not know anything about the PAC or the scurrilous piece until yesterday when he heard about the piece and then, like most or all other 6th District residents, found it in his mailbox. He has no idea why the PAC, or any other rogue, independent PAC for that matter, would do such a thing in any hyperlocal election like that for a City Cuncil seat and specifically that for Madison’s 6th District seat.

Yesterday evening Thornton called Rummel to relay his dismay that something like this had crept into the 6th District race.