“They really hit a home run with their plan,” said Joe Lusson who is a committee member and president of the Tenney Lapham Neighborhood Association. “I think it’s a real winning proposal. It’s what the neighborhood wants from all the testimony we got. I think it will be a real boost for the area.”

Madison City Staff with the Economic Planning and Development Department may have foreshadowed tonight’s vote when they recommended the Gebhardt proposal at a meeting last week.

“The proposal takes a very contemporary approach to the design that is consistent with the vision of the modern, “high-tech” vision for the corridor, while being sensitive to the development pattern of the surrounding context. Planning and Development Director Steven Cover wrote to the Committee. “The massing of the development is varied and reads like several related, but distinct structures. The proposed design incorporates a variety of quality, complimentary materials.” 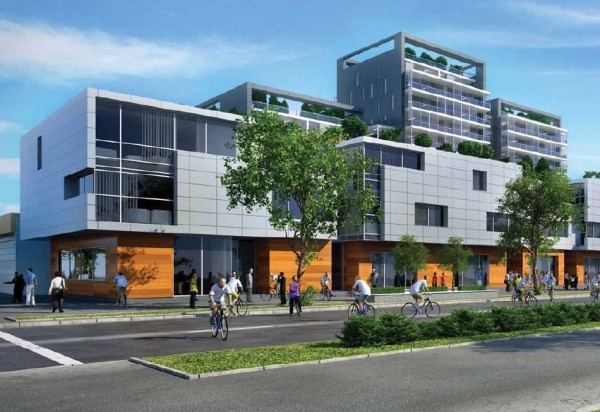 The proposed Passivhaus modules that use passive techniques to heat and cool the interior spaces. Courtesy Gebhardt Development

The additional committee recommendations as reported to District 6 residents by Committee Member and District 6 Alder Marsha Rummel are:

1. Incorporate Passiv Haus standards in all owner occupied units (instead of one)
2. Incorporate a ‘large research production farm with greenhouse elements and stormwater collection irrigation system.

Gebhardt Development Owner Otto Gebhardt III in comments to Willy Street Blog before the vote was also excited at the possibility of further developing the East Washington corridor which had been on his mind for years.

“I grew up in the neighborhood and I have always felt that the East Washington area has lots of potential, but was under utilized,” Gebhardt said. “We had an opportunity to begin the Constellation project [in] the 700 block. It is tremendously important that we continue our vision further along the corridor. We want to create something exciting and extremely beneficial for both the city and the neighborhood.” 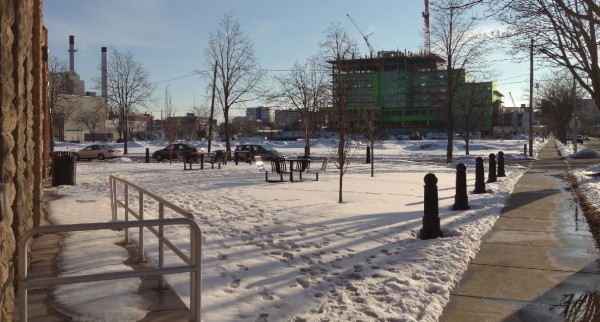 Gebhardt says the 800 block will be an extension of the Constellation project (shown in the background) now under construction. Photo by: Jamie Grunniwaldt

As has been the case in the past, approval of Tax Incremental Financing (TIF) from the City could derail the project. Gebhardt is requesting $7.8 million to help build the development as submitted. In their financial statement submitted to the City, Gebhardt said that the TIF amount may increase if sustainability projects on the site are further expanded; which of course the committee recommended doing.

The City Planning Staff is hopeful the financial negotiations will not hit any large snags and said as much in their recommendation to the Committee last week.

“The proposal is quite workable and staff feels that, through negotiations, it can make this project work.” Cover wrote. “Staff feels this project has the potential to be a game changer and act as a major catalyst for future development in the Cap East District.”

Lusson says that residents in the Tenney-Lapham neighborhood will likely meet with Gebhardt soon to go into deeper detail on some of the aspects of the project as they fine-tune their proposal for final approval by the Urban Design and Planning Commissions.

“I know we want to kind of tweak how the town houses look on Mifflin.” Lusson said. However he was also effusive about the complexity of Gebhardt’s proposal and how they involved local entities.

“The really hit a home run with their plan. They got the university involved, Sustain Dane and the Underground Food Collective.”