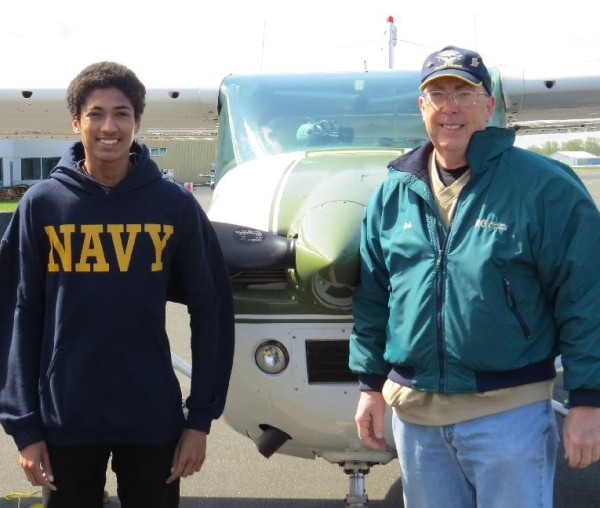 Madison East High Senior Charles Lombardo before his flight with Bob Gilbreath. Charles took aviation classes from the late Erik Anderson and will join the Navy this summer.

A promise of the departed was fulfilled by his friends Saturday (May 11) as students of Erik Anderson were given airplane rides at the Dane Country Regional Airport. Anderson taught Aviation classes at Madison East High School and music at Sherman Middle School for 11 years before he died suddenly in his classroom last September.

Known by students and colleagues alike as having the unique ability to connect and motivate the most troubled students, Anderson reveled in teaching Aviation at East and promised to take any student that was interested for a ride in his airplane, which he kept at his home on the Waunakee Airport.

When Erik died, his friends planned for a spring flight rally to make sure his students would receive that airplane ride and hopefully renew the inspiration to involve aviation in their lives in what ever way they wanted. Aviation is a welcoming community and a formal program to inspire kids through introductory flights has existed since 1992 through the Experimental Aircraft Association’s (EAA) Young Eagle Program, which Erik participated often. 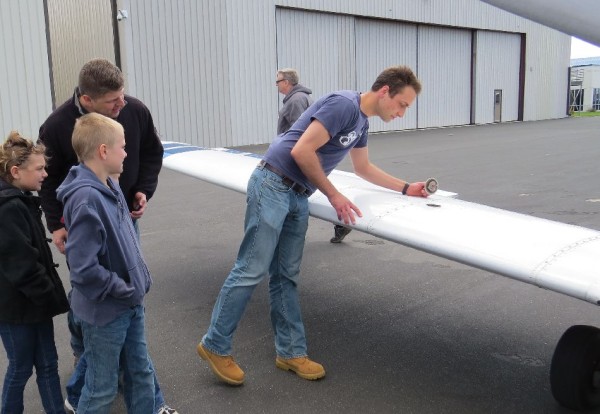 Pilot Nick Heffron shows some Young Eagles how to preflight. The lucky kids had just stopped at the airport to eat at the Jet Room and ended up taking an airplane ride.

So far the program has given over 1.7 Million children ages 8-17 years-old an introductory flight and many of those kids have gone one to give Young Eagle rides of their own. Other Young Eagles have gone on to great things in aviation. The flights are given by EAA members in their own aircraft, volunteering their time and costs.

On Saturday nine children were given rides, which included two of Erik’s students. Charles Lombardo is a senior at East and will graduate next month. He moved from upstate New York in 10th grade and began taking Anderson’s classes as a Junior.

Charles is entering the Navy as an air crewman and hopes to eventually move to the front of the aircraft. During his flight he did most of the flying and his Young Eagle Pilot Bob Gilbreath said he did quite well even in the breezy conditions that day. See video below of Charles after his first flight; the wind noise makes it hard to hear him but you can’t mistake that “First Flight Grin”, its worth the watch.


Brady Nelson had been promised a ride a few weeks before Erik died. Nelson is an aviation legacy of sorts in the Madison schools. Growing up he was interested in the Air Force at one point and was also inspired by his father Brian who attended East but went to Lafollette for Aviation classes.

As far as the flight, Brady seemed quite enamored and even took notes as his pilot Nick Heffron showed him how to preflight the aircraft. After they returned from the air it seemed as if that interest in aviation had bubbled up once again. 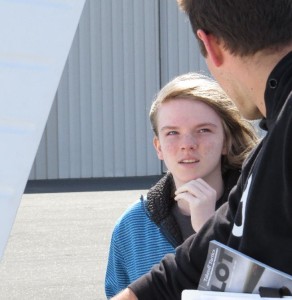 At the end of each Young Eagle flight the pilot signs a certificate which also bears the signature of Young Eagle Program Chairmen Chesley “Sully” Sullenberger and Jeff Skiles who you may know as the men who landed an Airbus in the Hudson River in 2009.

Jeff Skiles is now Vice President of Chapters and Youth Education at EAA and lives in Oregon, Wisconsin where he grew up, learning to fly from his parents who are both pilots.

All kids who complete rides also receive an access code to a free online ground school that if completed qualifies them to take the actual FAA Written Test that is part of the qualification to earn a Private Pilot License. The next Young Eagle Rally in the area is Saturday May 18 at Morey Field in Middleton sponsored by EAA Chapter 1389. There is also a June 1 rally in Milwaukee sponsored by EAA Chapter 18.

While all four Madison high schools have offered some sort of Aviation education, East and Lafollette have had the most highly developed programs with the program at Madison East becoming one of the top high school aviation curriculums in the country. Aviation education at East High School, which was started in World War Two, was taught out of the Science Department until Michael McArdle took over in the mid-1980s.

During that time Bud Rodgers (now retired) was also teaching Aviation at Lafollette including a class that centered around building an airplane. McArdle would go on to form an Aviation department at East, growing the program to four years of class offerings in ground training for pilots as well independent study options for a range of aviation focuses such as air traffic control, maintenance, and travel agency. Both McArdle and Anderson would split time teaching at Lafollette after Rodgers retired. 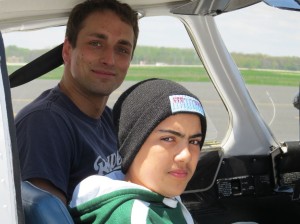 Peyton Agard received his Young Eagle ride from Pilot Nick Heffron. Peyton will attend East this fall and had hoped to also take Aviation courses but the program is being discontinued.

By the time I graduated from East’s program in 1991 McArdle had forged credit agreements with several universities in the upper Midwest. I graduated from St. Cloud State University’s flight program but had a head start, testing out of 18 credits due to the course work I completed at East. Michael McArdle is now in the Wisconsin Aviation Hall of Fame.

Erik Anderson would takeover when McArdle retired in 2001, and while he still carried on the career training aspects of the program, Anderson emphasized the nuts and bolts of flying and aircraft building which he excelled at best. I remember visiting his classes often and seeing his students working on radio-controlled models. And Erik was an example to his students, showing how a regular guy could build an airplane as he and his building partner completed the construction of their two seat RV-6 in January 2012.

It was truly a great loss for all of us who were very close to Erik, but we mourn mostly for the students at the schools where he taught. We were told he had an uncommon bond with them that brought out their best when no one else could. While the students were able to continue their classes this year, the future of this proud program is very much in doubt.

In an email to Willy Street Blog, East High Principal Mary Kelly confirmed that the program would not be offered next year. “As you know Erik was a one of a kind teacher and very difficult to replace. Because it is not a full time position it is very difficult to fill.”

In fact eighth grader Peyton Agard, who received a ride on Saturday, enjoyed the experience but was disappointed he wouldn’t be able to take Aviation classes next year at East; something he had been planning to do. But for one day though, Erik’s energy returned through the promise of his students like Charles and Brady who are continuing their dreams.