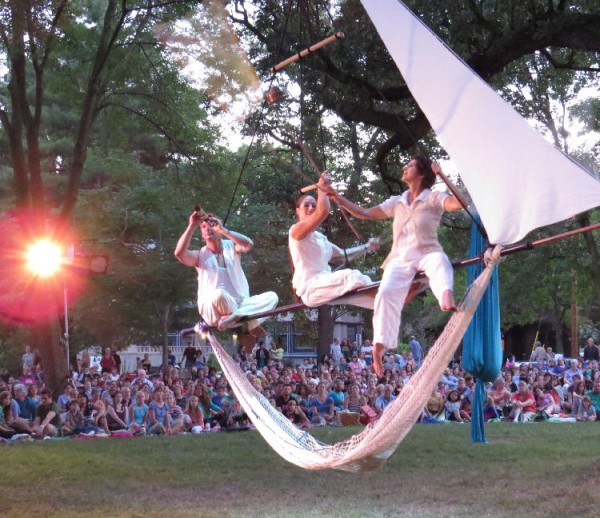 While circuses in the past have stressed amazing tricks, brash clowns and scary animals doing amazing things, Crycropia stresses the new wave of circus performances with a focus on human artistry and elegance and of course a little fun. 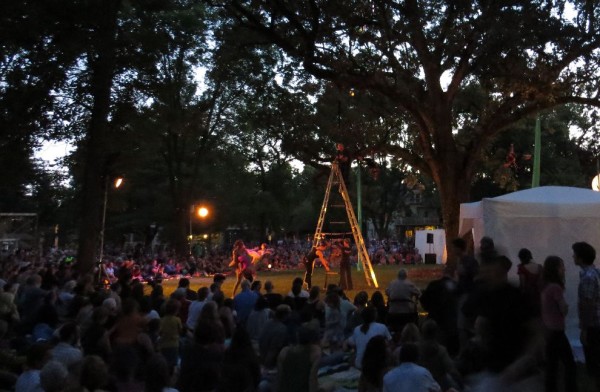 The performances between acts were true crowd pleasers.

The various acts in the approximately 90 minute performance began with a perfect opening: a visual recreation of the magical, mystical voyage of three children in the poem “Winkin, Blinkin, and Nod” using a custom steel trapezoidal apparatus as the ship. Out of sight, a narrator read the poem as the performers moved around the ship.

The acts moved from poignant displays of artistry, to impressive feats of strength, backed by wonderfully conceived ambient techno with a smooth beat that enhanced the visual displays.

Clowns in a circus are a great distraction and Cycropia used the time needed between pieces to change the sets with seamlessly choreographed performances by the dance company. Set to upbeat poppy music, 10-12 dancers would wriggle and hop their way into the performance space before stacking themselves upon each other in various human formations. 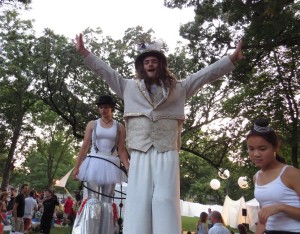 Two, what can be best described as “Master Clowns” dressed in bee-like costumes, would descend from the tree canopy via harnesses and do flips and turns before shimmying back up when the next act began.

Much of the company was dressed in colorful pattern-filled leotards and pigtails that gave off a cool vibe of the funky gymnast meets the Mad Rollin’ Dolls.

The performance most emblematic of the type of modern circus performing that Cycropia represents was “Tippy-Ay-Yea!” a duet between veteran Cycropia dancer Luv Joy Seamon and Kenneth Loud. Under soft red and blue lighting, they shared a large metal ring, slithering in and round each other in the most passionate and sensual way.

Loud and Seamon’s performance also included an incredible demonstration of the strength required of these dancers. At one point Loud assumed a gravity defying position where he was dangling head first by only one foot which was held between Seamon’s tightly-crossed legs. The configuration drew one of the many “Ahhs” from the crowed that evening. A portion of that peformance can be seen below.

Related: The Festival Among The Quercus