In addition to the building height, the subcommittee was concerned about the massing of the building along the bike path which presents both an imposing visage and could cause treacherous conditions in winter due to reduced sunlight possibly causing increased icing on the Capital City Trail. In offering their alternatives, BDG increased the building height on Williamson to five stories and showed eight and nine story options for the main tower that was stepped back from the bike path.

“I think they have made great strides in moving [the proposal] forward from what they had,” said Bruce Woods who chaired the 722 Williamson Subcommittee of MNA’s Preservation & Development Committee. “They listened to a lot of the neighborhood concerns and what they had to say…We as a subcommittee weren’t in place to recommend anything, it was just to help them keep on track with the neighborhood concerns.”

The challenge of an infill development like this is finding the right building to connect with Williamson street, providing parking for residents and tenants while accommodating the 150 parking stalls that are currently serving the three buildings owned by The Rifkin Group, and the Madison Candy Company building owned by John Martens. To replace all that parking at least two levels-worth of parking ramp must be built and structured parking is pricey. To offset this cost, BDG proposed the multi-towered apartment and commercial building. 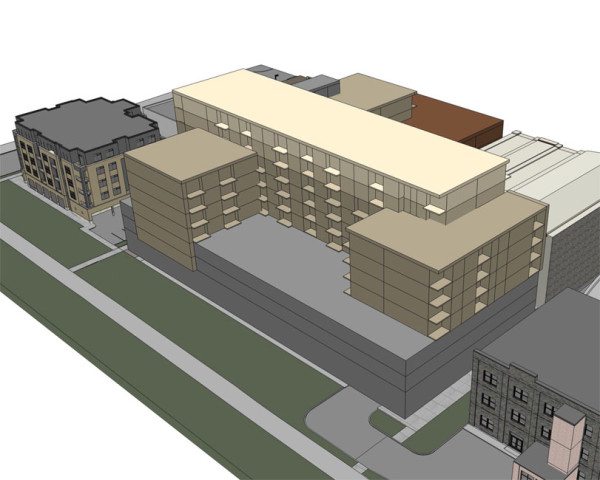 The orientation of the tower was flipped and reduced to nine stories in this version. The west portion is stepped back to give relief to the bike path. Courtesy: BDG

Large developments usually need Tax Incremental Financing from the City and the more rental units and commercial space can mean a lower TIF request. “Depending on the version, and we’re dialing-in costs, it’s somewhere in the two-and-a half and four Million dollar range,” Bower said.

Those costs start below ground before anything new is built. In a twist of irony, the BUILD II plan calls for buildings or at least facades along the street to match its historical past. On the 700 block the old industrial feel may look cool but there are skeletons below.

Where the parking lot is now used to hold, among other things, petroleum tanks that leaked over many decades. The environmental clean-up is estimated at close to $2 Million and it still might not totally fix the issue. 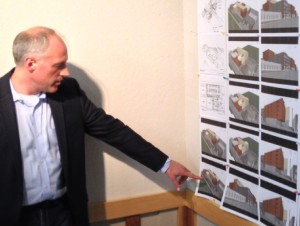 “Even with all the pots of money that we have been able to identify…we’re still at a gap, we’re still needing significant TIF support to go underground,” said BDG Member Tom Bergamini.

Berganimi is referring to underground parking which would help lower the height of the building but causes the cost of the project to skyrocket due to the initial and ongoing environmental clean-up costs that could include a water pumping and treatment system in the underground parking structure.

Nonetheless the prospect of a ten-story building is causing heartburn for some, especially those who live in The Livingston, a condominium and apartment complex on the corner of Livingston and Williamson.

Three residents and at least one business owner from the complex showed at the meeting to express their opposition saying their views of the cityscape will be obliterated.

“This isn’t infill to me, this is overfill,” said Jim Simon who lives in the Livingston. “If somebody needs to do infill here with another project, if this doesn’t work here it needs to fit-in with the neighborhood plan.” 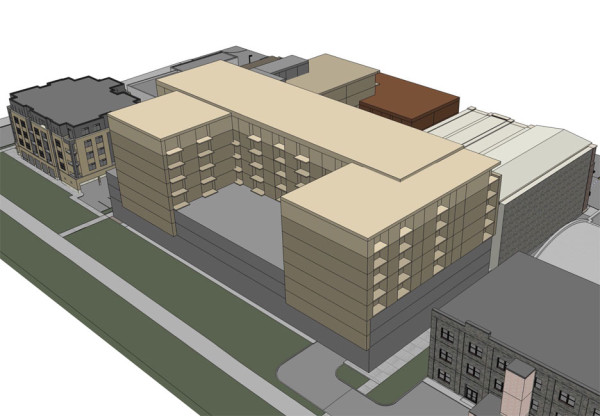 The eight-story configuration has the east and west ends abutting the bike path.

Tom Bergamini responded that their plan serves the entire block which includes parking for four commercial buildings that use the current lots that would be redeveloped. “Any development solution that comes here, that’s the starting point before you get one square foot of additional space. Any other developer that comes in has that same challenge.

Simon, who prefaced his remarks by saying he understood the challenges of the developers, responded that he had to take care of his own. “You have your problems, I have mine. You are making my property less valuable,” Simon said.

That sentiment was expressed by the other Livingston residents who say they purchased their condos with the Build II plan in mind that limited heights to five stories. Although some were not aware that two bonus stories can be awarded for affordable housing, preservation,or structured parking.

To meet the concerns of the neighborhood, BDG asked their architect to complete some additional massing studies on the site to see where heights could be lowered and make less of an imposition on the bike path.

To accomplish a lower height on the main apartment tower an additional floor was added to the building on Williamson to make up for the lost units. The middle tower will remain at seven stories but both an eight and nine story main tower were presented. 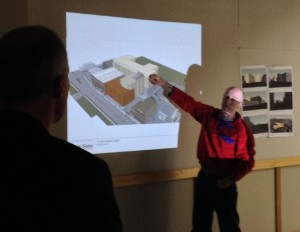 722 Subcommittee Member John Coleman expresses concern over how much the mechanical systems and housings will add to the height.

The nine story design features the most articulation with the tower taking the block C shape that faced Willy Street in the original design and flipping it to face north towards MG&E with the western end setback from the bike path.

The eight story version would not have a set back feature and the east and west ends of the tower would be massed on the bike path.

However the visuals presented were incomplete as they were done just to show basic shapes and heights and were not “skinned” with the final exteriors due to the two-day time frame between the subcommittee meeting on Monday and the P&D meeting.

Comparing these dimensions to the BUILD II plan, which allows five stories and a bonus not to exceed seven stories or 85 feet which ever is lower, BDG assumes that the City would approve the bonus stories.

However, that still means the eight story tower would exceed BUILD II by six feet and the nine story would be 17 feet over. In the eyes of BDG, the eight-story plan would be the heaviest lift since at least 10 rental units would be lost in the height reduction.

One criteria for the bonus stories is the availability of affordable housing which BDG hopes to have 20 percent of the units at 50 percent of Dane County median income. At the moment the units will be priced at 60 percent.

While 1, 2, and 3-bedroom units will be offered at market rates, it seemed apparent through the question and answer session, that at the moment, only the 1 bedroom apartments would be “affordable housing”. Bower said they are still working with the Wisconsin Economic Development Authority (WHEDA) on how to improve this aspect. 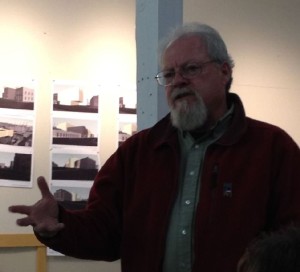 Opposition from those within a block of the proposed development has so far been from residents as well as others throughout the neighborhood who want to hold fast to the building guidelines.

However, Madison Gas & Electric, which operates the 100-Megawatt gas-fired Blount Station, sent two representatives to the meeting to provide their input.

Community Services Manager  David Benforado read a statement to the committee in which it highlights the power company’s participation in the formulation of the BUILD II plan and expresses concern of a residential development so close to the power facility without a commercial buffer.

“Although we have discontinued coal use and taken measures to mitigate noise, it is still a working power plant. We, and we assume the neighborhood, do not want nearby residents to be unhappy. We believe a commercial space would be a better and more appropriate use of that property,” the statement read.

If this project is to move forward it has to move pretty fast. Bower says that in the next sixty to ninety days he hopes the approvals will be completed or the project could be in jeopardy. Marty Rifkin, who spoke at the meeting said he is unsure if he would collaborate with Martens on future projects if this one falls through.

Martens also warned that it is risky to think the next developer will take such care to win the hearts and minds of the neighborhood. He noted that the Krupp building, which houses the Livingston Place Apartments, could be built anywhere and adds nothing to the neighborhood. “The building to me does nothing but take up space. This building [722 Williamson] engages the street, it adds to vitality, it would put people on the street,” Martens said. 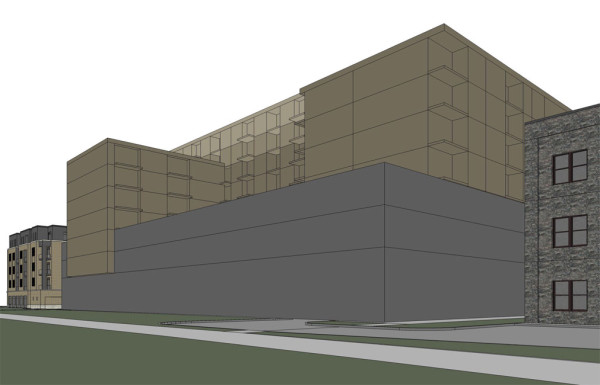 Ground view of the development from the bike path, which was a big concern due to the massing and potential for icing during winter due to reduced solar impact. Courtesy: BDG

But it was Judith Guyot, a past Chairwoman of the UDC, who asked the most salient question of the night: What makes this development so unique that it should be allowed to exceed the parameters of the BUILD plan?

“What we’re trying to do is solve the final piece of the puzzle here, and create a vibrant residential and commercial development that adds to the neighborhood. We’re gonna work on the affordability pieces and try and push it as far as we can,” Bower responded. “We’re trying to create a final infill piece of this block, to finish it off. Thats an integrated development that respects Willy Street and builds a streetscape along Willy Street that holds the entire block together.

Since MNA’s recommendation only carries so much weight in the City approvals process, the subcommittee was formed to help shape the project as best it can as the City imposes its own requirements on the development. After the meeting, BDG, District 6 Alder Marsha Rummel, and Woods huddled and agreed to determine the next steps after BDG meets with the City next week to discuss the project and its finances.

“This is not a project that will get one hundred percent unanimity in either direction. The question becomes…is this a project that adds to our neighborhood, adds to our city, Bower said. “We’re willing to live with compromises. Any one of these permutations has financial implications and so at the end of the day you have to get a project financed to get it built. We don’t want to be outside the BUILD plan.” 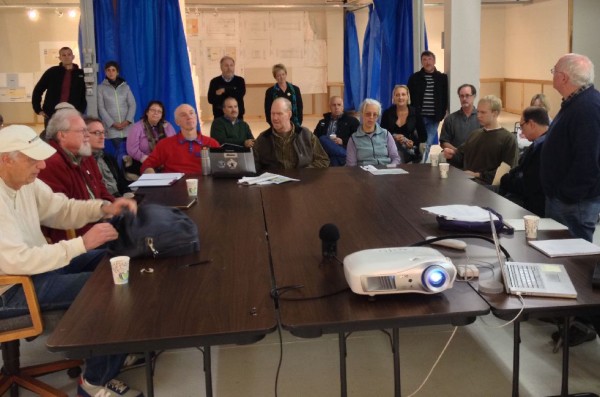