Both men grew up in the Marquette neighborhood and hope to create a bar that is accessible to the surrounding neighborhood while also seizing on the rising activity in the Capitol East District. Gentry opened One Barrel Brewing on Atwood Avenue in 2012, while Sullivan is a longtime business owner with three other hospitality establishments in greater Madison. 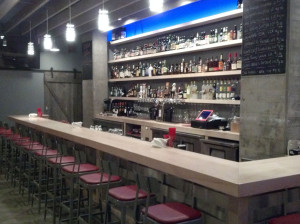 “We’re trying to kind of go with the modern industrial look. This is historically an industrial area that kind of went derelict,” Gentry said.

“I think it’s great the city [Madison] is putting a lot into revitalizing it…we’re trying to portray this look that hearkens back to that era.”

The vision for Capitol East is slowly emerging one location at a time. It first showed signs of life with the conversion of the Buy and Sell Shop building (across the street) into The Brass Ring, The Brink Lounge, and High Noon Saloon.

In The Constellation, which is owned by Gebhardt Development, Star Bar will be flanked by the soon to be opened Cargo Coffee, the second location for brothers Lindsey and Lynn Lee. They also own Ground Zero Coffee on Williamson Street.

While many advocates of density in the central city talk of the mystical 20-something Epic employee as the driver of housing and businesses in the area, Gentry points to concrete potential patrons who would be well served by his bar. This includes people from the Google offices upstairs, the young professionals living in the upper floors of The Constellation, and residents of the surrounding neighborhoods. 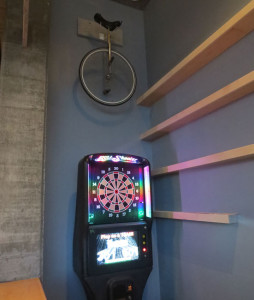 Dart board and unicycle. What bar doesn’t have this?

“We’ve got a lot of downtown people that commute in from the East Side, so on their way in they can get coffee and on their way out they can stop and get a beer or cocktail,” Gentry said. “We’re not just catering to the Capitol crowd…we’re allowing folks that live in this area to have that feel be their new neighborhood pub.”

Its been a long time since East Wash has been a pedestrian draw east of the Yahara, and even longer since neighbors gathered along the avenue on Friday and Saturday nights to watch the cars cruise by.

Both Cargo Coffee (which will have the only drive-thru coffee in the central city) and Star Bar seek to engage the avenue with a seasonal outdoor presence; however, no matter the time of year, it will be nice to see the this area become walkable once again.

It was Gentry’s idea to open another bar, as he found more time after hiring a full-time brewer at One Barrel.

After briefly considering a location on Sherman Avenue, he spotted a sign in the window at The Constellation and began talks with the leasing agent, who happened to be a regular customer at One Barrel.

While Sullivan was not necessarily looking to open another place, he seems energized by what the city has been trying to do in the Capitol East area. He also has known Gentry for quite some time, and even provided valuable help when Peter was opening One Barrel. 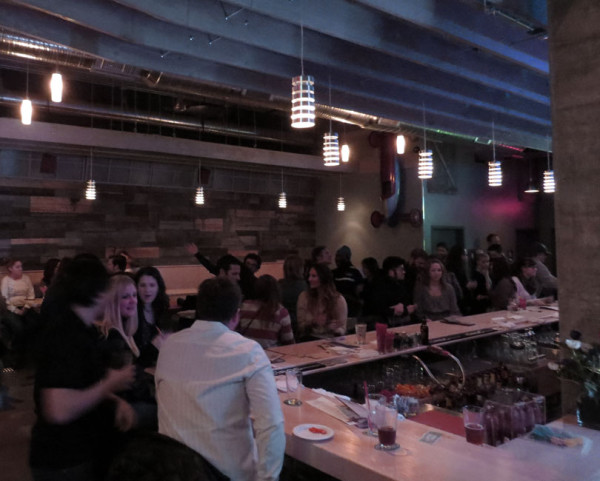 Friends and Family night January 13, 2014, a dress rehearsal for the opening later this week

“The location was very appealing to me,” Sullivan said. “I know what’s happening here. This has been in the works in Madison for a long time, to get this whole corridor down to [the] Yahara River developed.”

Sullivan also has a knack for tailoring the look and feel of his establishments to their locations. Hawk’s, on State Street, was his first place and his only restaurant (he says it will be his last) and deftly caters equally to the university and downtown crowd.The Atomic Koi in Fitchburg is an elegant cocktail lounge in the heart of a growing suburb, and Jade Monkey on Cottage Grove Road, adjacent to Lake Monona, straddles the edge of hipsterland and Madison’s traditional blue collar environs.

The inside of Star Bar is both stark and welcoming, in an old-school-meets-new-school style that reflects Gentry and Sullivan’s tastes in both decor and menu. 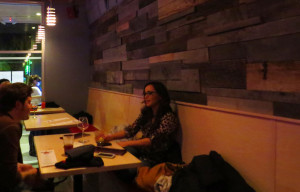 The barn wood wall a feature used to accent the industrial theme.

The floor, ceiling, and pillars of the 28-by-60-foot space are concrete with exposed electrical conduit, which further accentuates the industrial theme.

That look is softened by a barn wood wall above the banquette that runs most of the length of the space.

In the front half of the bar are several loveseats and coffee tables, along with the ubiquitous Wisconsin tavern accoutrement, the dart board. Behind the bar is an imposing stack of shelves that hold an array of wines and liquors in addition to eight craft beers and two One Barrel brews on tap. Gentry’s brew pub license allows him to operate in a similar manner to The Great Dane Pub and others which brew in one location and distribute to their other outlets.

The bar itself is a light-colored maple, constructed by Hawk’s father, Al, with help from Gentry’s father, Jim (although Jim supposedly retired from bar making after the masterpiece he constructed for his son at One Barrel). Both fathers spent many hours helping with construction, along with Hawk’s grade school classmate, Ian Grau. 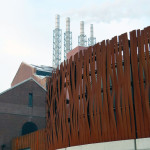 One interesting feature is a brushed metal weave design fronting the bar beneath the wood top, which was inspired by the nearby Capitol Heat and Power plant on Railroad and Blair Streets.

Behind the plant is a recently constructed raised basin. Long, wavy strips of iron are affixed vertically to the outside to beautify the otherwise utilitarian structure.

Sullivan said that while they did work with an architect, most of the main features of the bar were their own ideas.

“We wanted a wood-slatted ceiling, I wanted that barn wall, we wanted a long banquette, [and] we wanted basket weave,” Sullivan said. 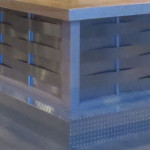 The basket weave theme continues with the lighting over the bar, featuring three-tiered circular brushed metal valances that descend down through the wood-slat ceiling on long, thin rods.

In a nod to some of the wall decorations at One Barrel, a soap box racer hangs vertically from a back wall, while a unicycle hovers above the dart board.

Sullivan has also purchased hours of vintage cartoons that will play on the televisions to provide additional atmosphere, along with a music kiosk. The bar will have occasional Badger and Packer events as well. 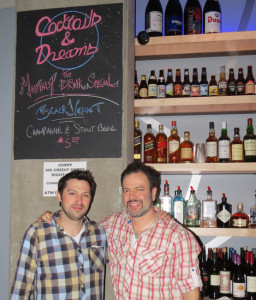 Peter Gentry (left) and Hawk Sullivan created Star Bar. No mixologists, but they will have a “Cocktails & Dreams” monthly special.

In addition to the carefully selected offerings of beer and wine, Star Bar will feature both traditional cocktails that Don Draper would order along with craft cocktails made with seasonal ingredients.

Gentry says the craft cocktails may not all stay on the menu permanently, although if you like a particular drink you can still order it out of season.

“We want to be kind of high-end and pay homage to the cocktail [without being] overly cocktailed,” Gentry said.

“In the age of mixology … you can confuse the average consumer. They just want a cocktail. At a lot of these craft cocktail bars the list is so daunting that you just end up asking the bartender to make you something … we want to avoid that.”

Sullivan adds that while craft cocktails may be all the rage, you will find no “mixologists behind the bar.”

“I employ bartenders that happen to mix drinks,” Sullivan said. “Mixology … I just think that’s kind of snobby … I want everyone to come here and feel comfortable.”

The aged should not fear Star Bar. Sullivan, 40, and Gentry, 34, have made their age difference into a philosophy that guides the bar. 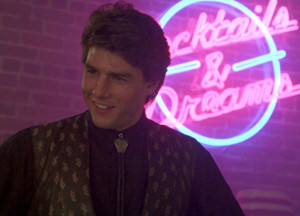 The old-school-versus-new-school theme was amplified recently when Sullivan was combing the Internet for neon lighting and came across a sign that said “Cocktails and Dreams”.

Sullivan shared the sign with Gentry, and they both got a laugh; however, Sullivan thought about it a little more and then asked Gentry if he had even seen the movie “Cocktail”.

According to Sullivan, the response was no.

However, Gentry doesn’t think he was that much in the dark. “I’m pretty sure I’ve seen it when I was younger … I tend to forget things from the ’80s”, he said.

Best bar in the universe

While Sullivan and Gentry may be light years apart on 1980s pillars of pop culture, they were of one mind about the name of the place: Star Bar.

Star Bar is housed in the The Constellation building.

They both independently went astronomical in their interpretation, taking the juxstaposition of their bar within the new building to inform the name. They felt an even greater kismet when they discovered they were both thinking of the same name.

While a star can be part of a constellation, Gentry and Sullivan are aware The Constellation building is named for a four-engine airliner produced by Lockheed in the 1950s.

But they can take comfort in the fact that a “star”, John Travolta, did own a military version of the aircraft for a time in the 1980s.

“Ultimately … it’s a neighborhood bar, so your neighborhood dictates what it becomes. This neighborhood is very diverse; I’m assuming the bar will be that way,” Sullivan said.

Star Bar will be open every day until bar time beginning at 4 p.m. Monday through Thursday and 2 p.m. Friday. The bar plans to have snacks for purchase, but no food menu except for Saturdays and Sundays, when they will offer a waffle brunch from noon to 3 p.m. – “kinda like an adult cartoon Saturday,” Sullivan mused.