Event begun to save elementary school, tai chi and other neighborhood treasures 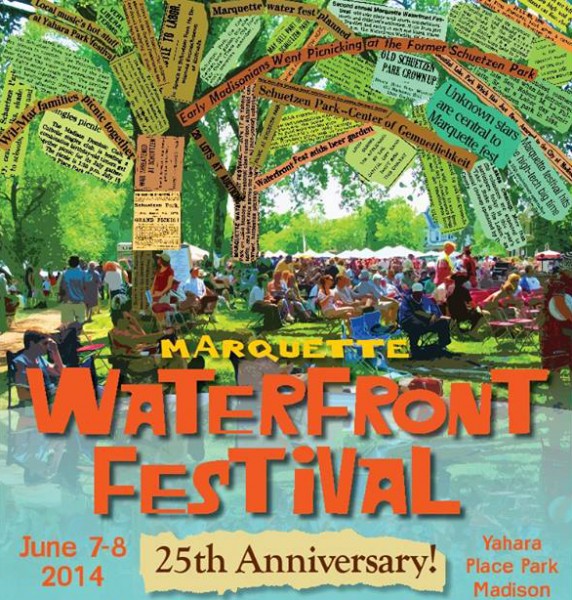 The Marquette Waterfront Festival (June 7-8) is twenty five years-old this year and while not the youngest neighborhood gathering it has the special role of heralding the beginning of summer. Just a day or two following the end of the school year for area children, it is the perfect weekend celebration for families which was the original intent of the event when it began in 1990.

The festival was born during an all-out effort to prevent the possible closing of Marquette Elementary school and other potential neighborhood elitism that was starting to bubble up on the east end of the Marquette neighborhood.

While much attention seems to be focused in the Willy Street area, our neighborhood does stretch all the way to Division street, encompassing sleepy and pleasant streets between Eastwood drive and Lake Monona. It was at Yahara Place Park, a quiet strip of land where people mostly just gaze at the lake, that parent Bob Queen and others plotted their neighborhood comeback. 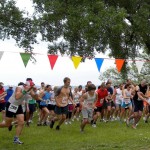 “We all had kids walkin’ down to school and we didn’t want to see our school go away. A Tai Chi class had been kicked out of Yahara Place Park…when I hear that, if people can’t tolerate a Tai Chai class, we might as well give them something they can really..” Queen said wih a laugh adding that they started slowly with a kids musical and some jazz.

SInce then Queen has been a catalyst behind the growth and verve of all the neighborhood festivals either as the head organizer or specifically the musical acts that are a key draw for people far beyond our city and state borders. The wild success of these festivals in the neighborhood probably has some wishing they had never asked the Tai Chi folks to get off their lawn. 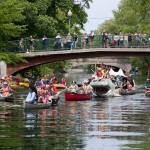 The Marquette Waterfront Festival has two unique and distinct elements, fun participatory events and of course the great musical lineups. The participatory side begins at 8:30 a.m. Saturday with the Dandelion Dash, a race begun by my dad during his running craze.

While dad no longer organizes the event, it still retains its signature attraction, the Dash which is a delightful 200 foot stampede of very young children who probably are running their first race.

Other unique events include the very popular volleyball tournament, canoe race, and a gathering with an inertia all its own, the River Alliance’s “Fools Flotilla” which is part regatta, part Mardi Gras on floats. In addition to the events, the festival will have its usual carnival appeal with face painting, street performers, local food vendors and the craft bazaar.

Normally, the festival each year features a world music line-up on Saturday and Americana on Sunday. Bob Queen says the Saturday bill will break format this year to bring back some popular and higher drawing acts in a nod to the anniversary of the festival.

Its a delightful mix of local and international bands including Yid Vicious, Califone, hip-hop with a conscience duo Lyrics Born and The Sadies all the way from Toronto.

In addition to the main stage, a folk stage, just west of the volleyball courts, will also feature several acts early in the afternoon. The weather later in the afternoon Saturday may get stormy and Queen says Lyrics Born and other acts may retreat to the Crystal Corner Bar should there be a washout. However Queen, who knows the park well, says its like a sand bar and absorbs water well which hopefully will not create Woodstock-like conditions.

Sunday both music and weather should test the capacity of the park as a very festival friendly sunny and 73 degrees is forecast. The Americana music line-up is a can’t miss beginning at 11:30 a.m. with Madison-based Building on Buildings, self-described as “midwest mercurial indie rock”. 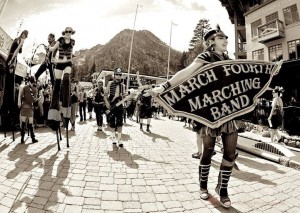 They will be followed by “Grampa” Jim Liban (Harmonica) and the Joel Patterson Trio. Robbie Fulks, described by The Journal of Country Music as country music’s Elvis Costello continues to crank up the intensity that will reach new heights with the New Orleans Suspects, which includes Aaron Neville’s drummer.

Queen says he rarely books an act three years in a row and was going to finish Sunday with Mother Falcon, a 17-member chamber-rock collective which he found featured on NPR’s Tiny Desk Concerts. However he could not resist ending the celebration with Portland, Oregon’s fantastical music act the March Fourth Marching Band.

March Fourth rocked last year’s fest and Queen says the group insisted on driving all the way from Kansas to make the gig. In a sign that our “Greatest Place in America” hasn’t lost its bohemian appeal, the band is reportedly sleeping in the backyard of of neighborhood friends.

The Marquette Waterfront Festival is a celebration and fundraiser for the Marquette Neighborhood Association which is a host along with the Wil-Mar Center, Commonwealth Development, and the Greater Williamson Area Business Association.