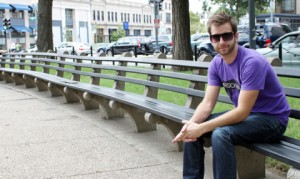 Michael Owen is a native of Cleveland and has painted almost 100 murals throughout the United States with 21 of those Baltimore Love Murals.

Three of the hands when spelling out “love” resemble American Sign language, but Owen explained to The Capital Times that it was by accident.

The backgrounds vary but the hands are always black which Owen’s Art Representative Ann Priftis says symbolizes the universality and power of love.

“He’s [Michael Owen] focused on spreading the LOVE message throughout the US, particularly to communities such as Madison that have such a vital community of artists and arts supporters, Priftis said in an email. “The power of the LOVE murals, as we’ve experienced first-hand in Baltimore to connect disparate groups in the community, is impressive, but the community itself must rally around the idea, Madison has this kind of strong support for artistic vision.”

The mural has a willing host in Plan B Owner Corey Gresen who worked with MNA Arts and Culture Committee Co-Chair Sharon Kilfoy as well as City of Madison Arts Program Administrator Karin Wolf in selecting the piece for the wall which faces the club’s parking lot. 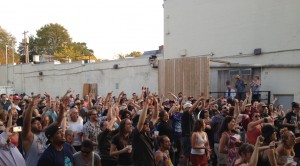 The Love Mural will adorn this wall, a perfect backdrop for the many neighborhood events held here.

“With the climate of LGBT [Lesbian Gay Bisexual Transgender]  marriage equality, the timing for this mural happened perfectly’, said Gresen.

“Plus Willy Street has always been a place of love and acceptance for decades and this will stand as a testament for decades to come.”

Plan B is celebrating its fifth year in operation and the mural stands to be a thrilling backdrop for events the utilize the club’s parking lot like Fruit Fest and the Willy Street Fair. Priftis also credits Kilfoy and Wolf for bringing the project to their attention and says Madison’s version of the mural will have an energetic, colorful textured background.

So as not to feel left out, the west wall of the Plan B building, which is owned by Chuck Chvala, between Madison Sourdough Company and Cha Cha Beauty & Barber will also receive an art piece, but this time by a local artist.

Craig Grabhorn, whose stencil art rose to prominence during the ACT 10 protests in 2011 will begin creating his piece “Pure Life” on July 27, featuring a stylized landscape with two outfacing skulls in the center. Grabhorn said the example he shared with Willy Street Blog is a rough sketch but will have the phrase “The core of your true self is never lost” across the top.

“The piece explores human potential. How we accept and interact with the raw which we are all provided, our respect for balance in that journey. Grabhorn said. “The detailing of the mural is missing in the sketch due to scale. But [the] intention is to utilize a build up of iconography to create the gradients.”

While he says its a rough sketch, Craig Grabhorn says his piece is entitled “Pure Life”

Murals on private property, a tree sculpture, historical markers highlighting the neighborhood’s social history as well as poetry in the sidewalks, which was suggested by Karin Wolf, were all incorporated into the arts initiative. Kilfoy said raising the money has been a challenge but there was lots of support from the beginning.

“We got the approval from the neighborhood association, ‘Sure you can have a hundred-thousand dollar art campaign, go for it!” Kilfoy related. 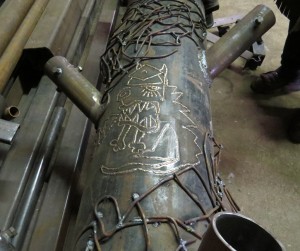 A portion of the trunk of the Gateway tree sculpture. The vines are actual recovered pavement rebar from the recent Williamson Street reconstruction.

The Greater Williamson Area Business Association also donated money and offered an additional matching grant which Kilfoy says is only a “few hundred short” of triggering the match.

Michael Owen will be painting the Baltimore Love Mural July 9-11 and will give a public talk on Thursday, July 10 at 7 p.m. at La Fete de Marquette. The mural will be dedicated July 12 at 7 p.m.