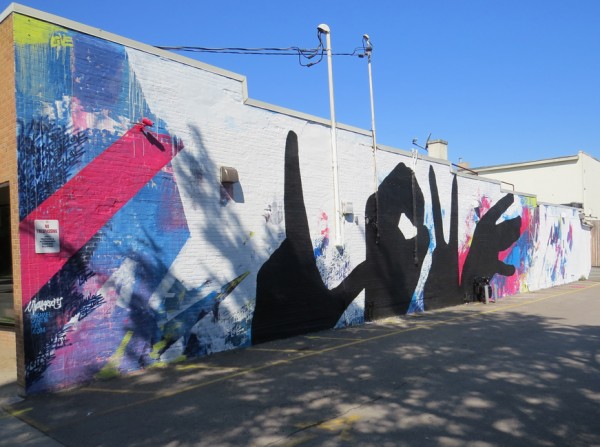 It didn’t take long for Artist Michael Owen to transform the beige, moribund east wall of Plan B nightclub into a vibrant Madison version of his Baltimore Love Mural. It took about two and a half days to finish the work which is only the second version of the mural to have color in the background

Deep blue colors, punctuated by reds dashed on top graffiti-style, fill the street end of the wall before they are abruptly halted by an off white background. In the center the iconic black hands that spell “love” give the viewer a breath and respite.

The blue does not hide for long as it slowly grows from below after the first hand, filling each space before exploding past the “E” hand in a joyful dance of colors toward the end of the building.

“A lot of these colors and the patterns, it was just feeling it out. I wanted to have a lot of energy going through the mural, thats why most of the motion is going in the same direction through the hands, off the road through the back.” Owen said moments after signing his name to the completed work. 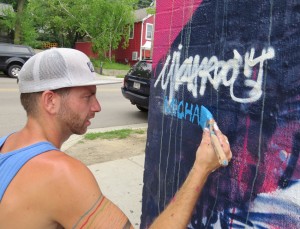 While Owen, 31, had an idea of what he was going to paint, often he has to make adjustments when he arrives on site. For Plan B’s wall his depiction of the background changed slightly for the mural which stretches nearly 100 feet.

“I think I kept a lot of the background a little looser…that has a lot to do with the wall texture. You really have to work with the wall and do what it says”, Owen said.

The Baltimore Love Mural is the second mural to go up on a wall in the neighborhood in as many years as part of the Marquette Neighborhood Association’s (MNA) Murals on Private Property initiative. Michael Owen, who stayed with MNA Arts & Culture Committee Co-Chair Sharon Kilfoy while in town, said he knew he was in the right place when he saw Panmela Castro’s “The Siamese Twins” on Willy Street Co-op East.

“Love it…I love that, they’re aren’t many cities that I’ve been too that are just super cool with having murals like that,” Owen said. “That was one of the first murals I saw when I came into Madison and I was like ‘I’m in the right spot to put this and people are going to receive it well…and they have.'”

When he was developing the original mural project for Baltimore, Owen says it grew out of the current theme of love he was using in other non-mural works. It was a more stripped down concept that contrasted the black hands of the mural with whatever space it was on. 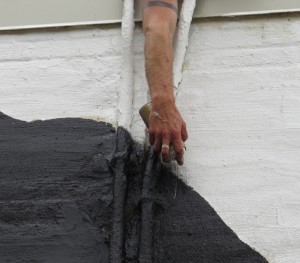 It took approaches from all angles to complete the work which is only the second mural of this series to have a colored background.

“I was using hands in my work a lot before that to symbolize community. Love was kind of a subject I was tackling in my other art as well,” Owen said. “I thought it would look good as a mural; at the time it was completely different than anything else I had ever seen, that scale, the graphic nature of it, just the black hands on whatever wall it was.”

The 20 murals in Baltimore took about five years to complete and he said it took quite an effort since he wanted to connect the entire city, not just the parts that he himself or a few others felt were special. In simple terms he says his core theme of love has been the true motivator in much of what he has accomplished.

A dedication ceremony was held Saturday night at Plan B and if you missed it don’t worry; Owen says the last few days have been filled with friendly faces and smiles meaning that a return to Madison is likely.

“I hope I can come back…I think [there is] a lot of potential to do some more cool things. Not just painting but connecting the community with art and connecting people with art. Thats kinda what I try to do as an artist, trying to communicate with people through that. There is a lot of room to still do that here.”

Michael Owen stands atop his masterpiece just moments after signing his work.