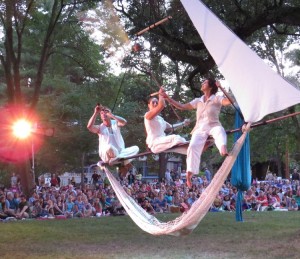 Cycropia Aerial Dance will once again perform from the large Burr Oak that was spared damage when a tornado passed by in June.

Fortunately, the large stately oak in the southwest corner of Orton Park was spared any damage by the June storm and is ready once again to host the Cycropia Aerial Dance during the Orton Park Festival this year.

Cycropia Spokesperson Kari Dickinson says that while there will not be a themed performance like the past two years, the troupe has prepared some new acts that celebrate their unique stage.

“The performance will be a showcase of powerful and dynamic new works choreographed with the tree in mind and that demonstrate the grace and beauty of Cycropia’s longstanding traditions,” said Dickinson. “Transitional elements will once again include tree dancers — this year illuminated with black light — and stiltwalkers.” 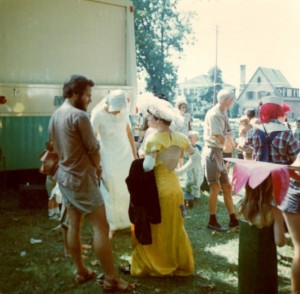 The MNA Picnic, renamed the Orton Park Festival, in 1975. Both the event and the organization were often sustained by a dedicated few.

MNA is facing a leadership crisis of sorts as its President Michael Jacob announced recently he will not seek re-election.

A total of six board positions can be contested when elections are held this October, but only three of those seats will have incumbents. The organization will be staffing a table during the entire festival to sign-up members, give out information and hopefully recruit some candidates.

This year marks a watershed moment of sorts as Orton Park’s musical selections will not be guided by Bob Queen, the longtime lead organizer of the festival. While there has been some minor squabbling over Queen’s outsized role in the festival for the past several decades, he has left a supremely positive and indelible mark on the look and feel of the event.

Two years ago Queen announced that he was stepping back from overall management of the festival, focusing instead of just the music and some fundraising. For Queen, it was time he moved on to other pursuits and for MNA it was time to diversify roles before Queen took all the institutional knowledge with him.

This year will be the first time Queen will not be in Madison for the festival. Instead he is enjoying Portland, Oregon with his wife Nancy Kathman who was also deeply involved. He wrote in an email to Willy Street Blog that the Central Park Sessions concerts (the concert series was organized by Queen) was his Orton this year and wishes everyone well. 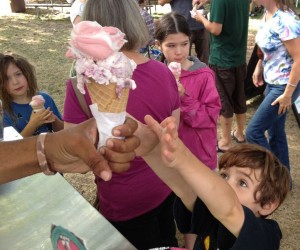 A boy reaches for his order of Lemon raspberry twist and blueberry cheesecake ice cream from The Chocolate Shoppe.

The slow departure of Queen is emblematic of a transitory time for MNA and the neighborhood which for many many years had enjoyed steady stewardship of the events by several key volunteers that helped sustain and grow support systems and the stature of the neighborhood.

The emergence of Central Park was the realization of the dreams of many; but also tugged at traditions as for a time discussions of moving the Orton Park Festival to the new space emerged.

Agitating by Orton neighbors over the size, scope, and noise generated by the fest, along with the environmental impact each year’s festival supposedly wrought, also spurred many discussions.

One good result of the debate is a reorganization within MNA of its committees that allow more involvement, oversight, and flexibility over events and programs. Additionally, it helped to formalize agreements and procedures such as event insurance coverage that had been adhoc for many years and put the organization at risk.

In addition to the music, the festival has a little bit of everything, a bazaar featuring local vendors, food carts, plus the MNA auction and the Cake Walk which organizers say you too can contribute a cake if brought down by Sunday at 2 p.m. 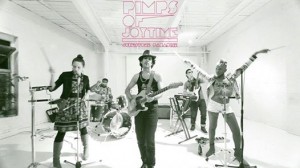 Wil-Mar Center volunteers will be selling soda, Glass Nickel Pizza, burgers, brats and sweet corn with all sales to benefit the center. Thursday night a Pizza and Ice Cream Social will precede the Cycropia performance.

On Sunday the Jazz Brunch features singer Sally de Broux who will serenade attendees while they feast on pancakes and peruse the Potluck Bake Sale.

On the Main Stage the music begins with the Back to Country Revue and then the schedule weaves its way from The Midwest Best to alternative country signer Lydia Loveless with a break midway through for the MNA Auction and Cakewalk.

The music and festival finish a bit earlier than years past, but in fine fashion as the flashy funk band The Pimps of Joytime help the adults and children, who for decades have loved this park so dearly, twist, dip, and stomp through one of the last weekends of summer.