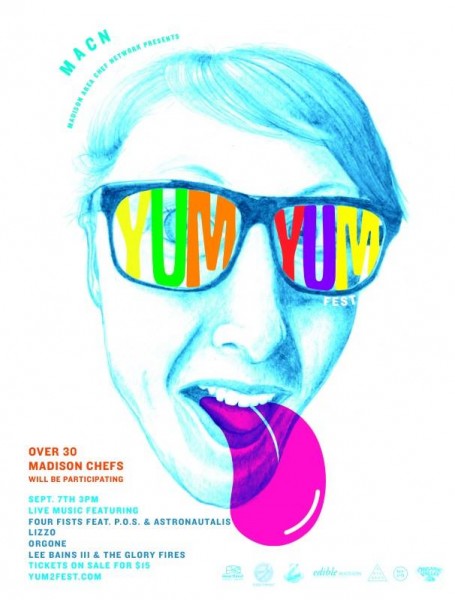 “We’re not trying to compete with Taste of Madison, we’re focusing on local products and local businesses,” said Dan Bonanno, executive chef at A Pig in a Fur Coat. “We’re not going to have Sysco, or McDonald’s or Pepsi sponsor us. Organic Valley is one of [our sponsors], we have Edible Magazine.”

The event will feature a dish (3 oz. portion) from 30 local chefs representing 25 restaurants from across Madison. The great food will be paired with beer and wine from local vendors that many of the chefs use in their daily servings. General admission tickets are $15, children five and under are free. The gates and music opens at 3 p.m., VIP tickets are sold out. Proceeds will benefit the Madison Parks foundation

Over 1300 VIP tickets were sold for the event which includes more food, a class taught by one of the MACN chefs along with a gift bag, but Bonanno says some of those details are still being worked out when he talked to Willy Street Blog earlier this week.

Ironically, A Pig in a Fur Coat’s dish will be comprised of veggies according to Bonanno. “I’m thinking outside the box, I’m doing hour house made burrata cheese, heirloom tomatoes, onions, a couple of other things from our local vendors…we’re doing more of a vegetarian thing. So, not pig”

In its short time since Madison’s newest park has been open there have already been several musical events between La Fete de Marquette and the Central  Park Sessions. Yum Yum Fest will also have music with four bands slated to perform including: POS and Astronautalis, Lizzo, Orgone and Lee Bains III and the Glory Fires.

As for the nascent MACN Bonanno says that it’s going well and that they have begun planning a more hands-on week-long event this winter that will highlight various aspects of the restaurant business. The event is still very much in the planning stages but could feature a cheese maker at one restaurant and then later in the day a winemaker at another. The next day might feature a number of chefs at one restaurant serving a dinner.

“So a little more creative, more fun week, not just putting out a menu and people coming in.” Bonanno said.