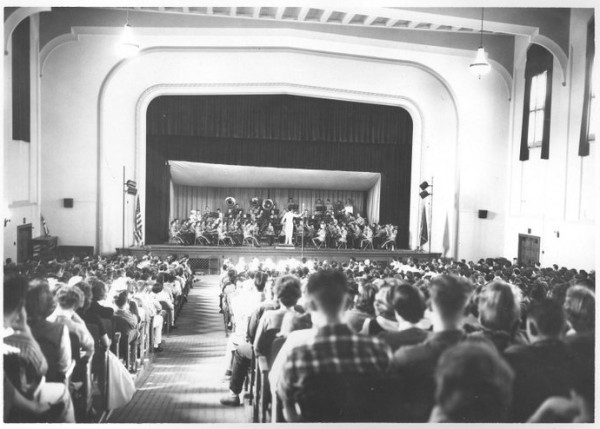 “The Aud” in the mid-1960s was a much larger venue, but was artificially reduced in both capacity and aesthetic. All photos courtesy: RaiseTheCurtain.org

There is a renewed push to thrust the renovation of East High’s Margaret Williams Theater back into the funding priorities of the Madison Metropolitan School District (MMSD). Several years ago theater boosters launched an effort to restore a certain amount of grandeur to the auditorium that was completed in 1926, four years after the school was built.

By 1970 the classic look of “The Aud”, as it was called since its beginning, had been largely eliminated. The rear entrances were replaced by a false wall that eliminated a large section of seating and the ceiling was lowered which covered arched windows located near the top of the towering walls of the theater. The remaining space at the rear of the theater was converted into two classrooms. 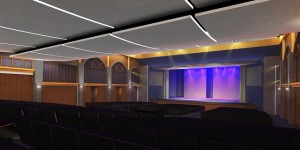 A rendering of the proposed renovation of the Margaret Williams Theater.

This week supporters of the theater renovation are imploring current and future parents of East students along with community members to complete an MMSD survey concerning facility improvements and highlighting the need for theater improvements.

Ann Brickson, a theater supporter, says the recent economic downturn along with a belief that the district should fund most of the improvements has hampered private efforts to raise the estimated $3.5 Million required to complete the renovation.

“The East High theater is in terrible condition. The East community has organized and developed a renovation plan. Now it’s time for the school district to step up and do its part. Funds for East High theater renovation must be added to the facilities improvement plan,” Brickson wrote as the suggested comment to add to the completed survey.

Through my time at East (1987-91) I spent hours in the Margaret Williams Theater assisting with productions and signing in various concerts. It wasn’t until over 20 years later did I learn that The Aud had been transformed into an aesthetically lifeless performance space. Behind those cold, monolithic, acoustically-articulated walls was a glorious beautiful past. 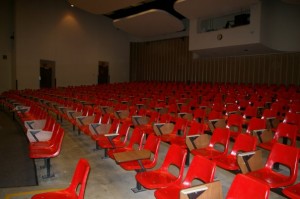 The Margaret Williams Auditorium in its current configuration.

Gone was the wonderful mural that adorned the rear wall, replaced by the false wall along with muddled and muted wooden strips that may have served acoustics well but definitely failed art.

Regardless of the needs at the time, better acoustics maybe, but more likely cost savings; the plastic chairs with their folding desks made the event experience mildly uncomfortable at best. Other than taking the American College Testing (ACT) exam, I don’t remember ever using those desks for a school-sponsored academic activity.

As a high school-age student I didn’t know who Margaret Williams was. But now I feel her memory, through that long-ago redesign, has been betrayed by 1970s-era public architectural utilitarianism.

The new plans seem to strike a balance between historic restoration and modern accommodation. It is time to honor Margaret Williams with a theater worthy of the decades she devoted to creating, through the many performances over the years, an artistic centerpiece in the heart of Madison.

An MMSD public meeting about facilities improvements is being held October 15, 6:30 to 8:30 p.m., at the Goodman Center.