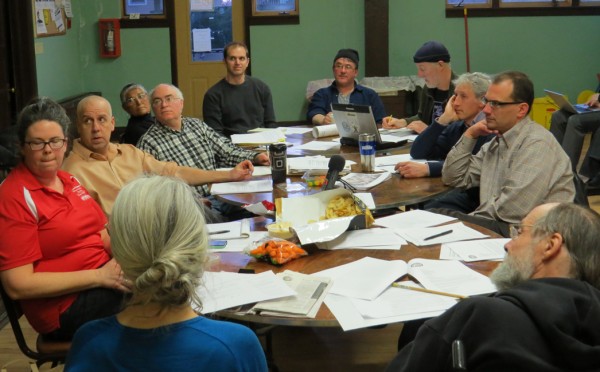 The MNA Board during a meeting in March 2014.

The Marquette Neighborhood Association (MNA) holds its annual Membership Meeting Thursday October 15, at 6:30 p.m. with an open house at 6 p.m. The gathering, held in the Marquette Elementary School Cafeteria  accomplishes several goals for the year.

It allows members to pay annual dues, vote on new Board members, hear the yearly state of the neighborhood address from the  President and approve the yearly budget. The Board also presents the Good Neighbor Award to two individuals who have made positive impacts on the community.

The Marquette neighborhood runs from Blair street on the west end to Division Street and portion of Dunning on the east. Its northern border is East Washington Avenue and then winds its way toward the lake along First Street and then along Eastwood Drive.

At Thursday’s meeting the association will elect a new president as Michael Jacob is not seeking reelection after nearly two years on the job. Jacob is leaving in part to focus on training for the Ironman Triathalon.

Each year half of the 12 member board is elected and eight people are running for the six opens seats including three incumbents. The newly elected Board will meet after the meeting to decide on interim Board officers (President, Vice-President, Secretary and Treasurer) which will be ratified at the November Board meeting.

Read the Board Candidate Statements

In addition to the electoral proceedings, there will be a presentation on the Yahara River Corridor Conceptual Study by Jay Wendt of Madison Department of Planning followed by discussion as the Board hopes to increase engagement on this issue.

Another recent tradition is to present a Good Neighbor Award to fellow citizens for their tireless dedication to neighborhood improvement. The nominations are presented below. Residents have until noon Thursday to contact board members to offer further input on these nominees. Current Board members Lynn Lee and J. Cheema declined their nominations. The nominations as submitted are listed following the meeting agenda.

Anette Hansen (nominated by two different people). She is an incredible volunteer for MNA, specifically, putting in a ton of work with Orton Park Fest. She organized the vendors, all while dealing with her roof torn off by the tornado in June.

Melody Niwot for her exceptional work on the natural play structure at Orton and for just plain spreading joy on her walks around the neighborhood.

Julie Spears (nominated by two different people).  She worked tirelessly for the MNA Arts Initiative – always doing “back-of –the-house” tasks that lack the glamour and recognition of the co-chair positions. Julie carries the neighborhood in her heart – and is never afraid to roll-up her sleeves – and do the hard work… She was such a huge help to me on the Chili Dinner, served for 8 years on the board, came to our board retreat, helps run the Arts Committee, and I saw her all summer at the many festivals volunteering.

If this is not a great candidate for the award, I don’t know who is?

Linda Lenhertz (no additional commentary with the nomination, though presumably for her amazing attention to detail and diligent work on development issues

The owners of the three properties on the even-numbered side of the 400-block of South Paterson Street:

–Nick and Leslie Schroeder, who live in the historic brick building (854 Jenifer) at the northwest corner of the intersection of Jenifer & Paterson Streets

–Dorla Mayer, who owns the historic brick building (851 Williamson) at the southwest corner of the intersection of Williamson & Paterson Streets

Collectively, through their diligence through the hard winter just past kept their sidewalks clear of snow and ice, despite the rather steep grade of that block, and enabled me to continue to be able to get to and from my bus stops at Jenifer and Paterson, even though I have reached an age where I need a cane to help me get around. These people epitomize the acme of good neighborliness! I apologize for not knowing the surname of Maryline who also lives at 416 South Paterson with Steve Ohlsen.

Tornado Responders: The night of the June tornado that ripped through much of the MNA neighborhood one person suffered the loss of their roof from their home.  As horrible as that was what happened in the minutes and hours that followed was quite inspiring.

Though I have no names of the folks who were the ones that came to that home late at night when the rain was still falling and started moving items and bringing tarps and doing all the things that need to be done at a time like that the stories which circulated for a long time afterwards painted a very uplifting spirit that took place among neighbors from blocks away who gave of their time and abilities.

That event reminded me of the ones from history books about living on the prairie then a barn-raising needed to completed or a sick farmer needed crops picked and all those around helped out. Our community likes to argue the issues and at times it seems we all have our own narrow interests.  But then things happen which demonstrate we indeed have larger interests that connect us and underline our commonalities, and as such I wonder if that should not be recognized in some way.

Again, this does not seem to lend itself to any award for any one person unless there was someone who organized it all and I not privy to that information.  Still I think it might be nice in some way to bring to light the goodness that came when so many agreed to respond in such a positive manner in the midst of chaos.