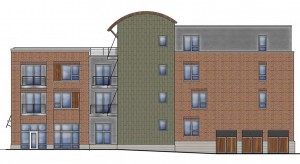 The barrel roof  and window alignment gave City Staff pause but changes have been made to the design which might smooth approval.

At last month’s meeting Landmarks denied the demolition permit 4-1 and tabled the request by the developer to approve a “Certificate of Appropriateness” for new construction.

Besides the issues the commissioners had with demolishing a home that contributed to the historic fabric of the neighborhood, they had concerns about aspects of the new building including the barrel roof and window alignments.

News of the decision last month brought varied reaction from residents in and out of the neighborhood. Many applauded the denial of demolition as a defense of preservation and the neighborhood planning document that guides the city about land use in the Third Lake Ridge Historic District

Almost an equal number of people bemoaned the usual Marquette neighborhood foot-dragging when it comes to development and felt that some residents were burning a candle for a derelict building that was in horrible shape. The sharpest condemnation of the decision came from current and former residents of the house who had little nostalgia for the place.

“I live in that house, it’s a shit hole. The landlord has intentionally ignored the property so he can sell it for development,” said Nathan Johnson Zukas.

Rummel said she initiated the reconsideration to keep the discussion of the new building at Landmarks and expected to invite the developer to present changes to the design at the upcoming July 20 commission meeting. To everyone’s surprise, Fortis’ representatives Knothe-Bruce Architects presented changes at last night’s meeting. 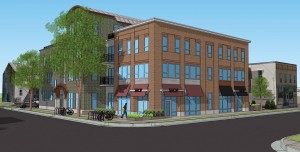 “Amy Scanlon, the city preservation planner, stated that in her opinion the changes presented met the standards for compatibility of new construction, thus addressing (g) in the demolition criteria,” Rummel wrote in an email in response to a constituent who questioned her on the listserv about why she changed her vote about the demolition.

While Landmarks has approved the demolition of the current structure, the new building has not yet been approved and will go before the Commission on July 20. Rummel says that the experience of this project so far and developments of the past shows that the historic appeal of the neighborhood needs to be marketed to it’s own residents.

“One thing I learned from the process around 906 Willy is we need to have a massive PR campaign to tell our neighbors about what it means to live in a historic district and how it contributes to the livable walkable mixed use neighborhood we all love. It is not a coincidence that the Third Lake Ridge district is so appealing, we’ve been protecting the fabric and sometimes allowing infill that fits the scale of our historic neighborhood for over 30 years”, Rummel wrote.

4 thoughts on “Demolition By Neglect”