Full disclosure: I will be 40 this year. I have a background in audio production, I am a huge electronic music fan, and I love how the Marquette neighborhood has evolved into the best place to live in the city. My parents are one of the three families that live on Jenifer Street who have been affected by the noise and have been the most vocal. My parents have lived there since 1970 and, along with others, have considerable sweat equity in building the foundations for establishments like Plan B and the Willy Street restaurant renaissance to flourish decades later.

It is through this lens that I cheered on places like Plan B for continuing to diversify the neighborhood, and resisted buying into the increasing complaints about the noise. The folks that built this neighborhood, I thought, were being a little harsh about things and needed to accept the youth movement that actually wanted to live here.

While not a packed parking lot, patrons linger too long. Plan B seems to be failing at the simple aspects of noise control despite promises.

But that was prior to moving back home a year ago, living in my parents’ basement. While my father complained about the bass thumping keeping him awake all night, I didn’t understand until I saw my septuagenarian parents turn into zombies from lack of sleep.

Up until recently, my occasional overnights at their house only exposed me to random encounters with loud screaming and yelling when Plan B patrons leave and melt into the neighborhood to retrieve their cars. Too often patrons would have loud, protracted, alcohol-fueled conversations outside their cars instead of getting inside and driving away. Broken glass from bottles is a constant.

While my job has me on the east coast half of each month, I am home enough to experience this all for myself, which leads me back to that walk I took the other night on the way back from a friend’s house on Ingersoll Street. I was distracted in my own thoughts when I reached the corner of Brearly and Jenifer Streets and the Wil-Mar Neighborhood Center at 953 Jenifer. It was 11:53 p.m. 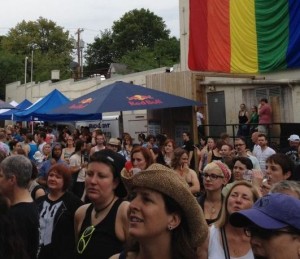 The 12-foot privacy fence does not extend beyond the stair area around the door and is ineffective against parking lot loitering.

Plan B is located at the bottom of the Third Lake Ridge, which runs from Blount Street east to the Yahara River. Jenifer, the next parallel street south of Willy, runs on the top of the ridge. In this mixed-use neighborhood the residents are no strangers to noise from bars, motorcycle clubs (the CC Riders had a clubhouse behind the Wisco in the 1970s and 80s), festivals and so on.

Plan B has brought the revelry of a neighborhood festival nightly to the residents within a block or so of the club. Additionally, the building Plan B occupies was built for an industrial purpose and does not contain the noise the club generates.

Plan B has done a lot to ameilorate these issues with more interior insulation, bass traps, a large privacy fence near a back door where smokers hang out, and more security to police the parking areas. But that isn’t solving the problem, because Plan B’s management still doesn’t fully accept the problem and have done a poor job of managing their own noise mitigation plans.

I was not out to find noise at Plan B. I was just walking along, enjoying the evening air, when I heard loud talking and yelling while passing in front of Wil-Mar, which is on the south side of the street; Plan B is on the north side of Williamson, 550 feet (183 yards) straight line distance away.

I crossed Jenifer and walked past the next four houses to my parents’ house and decided to follow the noise, which took me through our yard which connects with Willy Street adjacent to 933 Williamson. At this point, I was across from Plan B’s parking lot, and I saw at least five or six people gathered in the rear of the building. These people were indeed the source of the noise I heard nearly a city block away (625 feet or 208 yards), with two rows of houses, trees and other structures in between. 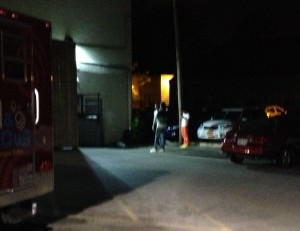 The loud talkers were first heard from over six hundred feet away.

The member of the security team made no effort to ask the women standing near the front or the gathering of smokers in the back to move on. The 12-foot-tall privacy fence that was touted by Plan B’s owners as one of their improvements to reduce noise only encompasses the stairway around the rear door. None of the patrons were behind the fence; they were standing 10-15 feet away from the building in plain view.

Is Plan B signaling submarines?

Noisy patrons coming and going from a club is the easy part of this problem. The bass noise is more abstract and hard to explain unless you have experienced it yourself. We hear music from a car as it drives by. Rarely do we hear the singing, rapping, or backing music first; it’s most always the bass until the car is near. Bass operates in the lower end of the frequency range, the sound waves are longer and they travel farthest. All parties in this dispute agree that the roof of the building vibrates to the dance floor beat, sending the bass up hill to Jenifer Street.

An extreme example is the Navy, which uses Extremely Low Frequency radio waves, broadcast from northern Wisconsin, to communicate with submarines in the Atlantic Ocean. All other portions of most music is in the mid- and high-range frequencies, and that is why Plan B can say they are in compliance with noise ordinances. The ordinance measures sound in decibels on the “A” weighted scales so sound can be reported as a single number, according to this acoustics FAQ.

Unfortunately, human perception of loudness vis-a-vis frequency changes with loudness. When sound is very loud – 100 dB or more, the perception of loudness is more consistent across the audible frequency band. “B” and “C” Weightings reflect this trend. “B” Weighting is now little used, but C-Weighting has achieved prominence in evaluating annoying community noises such as low frequency sound emitted by artillery fire and outdoor rock concerts.

As you can see a “C” weighted measurement would give a better representation of the entire sound spectrum and better illuminate the crux of the problem of perception. By the time the bass reaches the houses on Jenifer, the mid- and high-range frequencies have dissipated. So it may not be illegal, but it is surely still a nuisance, and there are ordinances about that.

May I make a long-distance request and dedication?

I walked back to my parents’ house. My room in their basement has an outdoor entrance that faces Willy Street, and standing outside that door I could clearly hear the bass beat starting and stopping with the music. Once inside and settled with the television on, watching old West Wing episodes with its chatty running dialog, I could still hear that same bass clearly. It was 12:18 a.m. 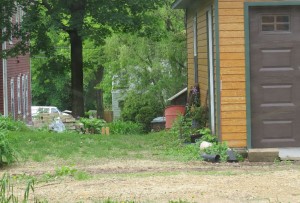 Even a basement bedroom can’t really mitigate the bass on many nights. Plan B’s parking lot can be seen in the distance.

It makes more sense that my parents’ bedroom two stories above catches more bass waves than me. However, there are two large two-flat homes between my room and the club, and on a normal night when exhaustion is not a factor, the bass would keep me from sleeping, too. Nobody appreciates a phat ass drop more than me but when it comes to sleeping, bass is not the same as white noise. The original sound study commissioned by Plan B noted that bass has an “annoyance factor”.

Because hearing this bass is a “you had to be there” kind of situation, I tried to record the sound of the club from my back door that night. There was a breeze that can be heard, but about 7 seconds in you can distinctly hear music in the distance.

Hearing with my naked ear, the bass was even clearer, even above the traffic which can be heard on the recording but is rarely heard through the walls. The bass has a penetrating quality that is great for open-air concerts and crowded clubs, but it is annoying to the nearby neighborhood that wasn’t interested in attending the show.

Plan B’s owners keep coming back to the fact that they are in compliance with the noise ordinance, have conducted multiple noise studies, and claim that only a few people are really complaining. At the April Marquette Neighborhood Association board meeting, Rico Sabatini reported that they hired more security to deal with the noise in the parking lots.

Sabatini said as much at last week’s ALRC meeting as well, pledging to work with MNA on a fundraiser, suggested by one of the noise-affected neighbors, to fix the roof. But the neighborhood shouldn’t have to raise money to fix a problem a business clearly brought upon itself as a direct result of its own operations.

Plan B should have their license renewed. But there still is some cognitive dissonance on the part of Plan B, which was apparent last week as they urged ALRC members to walk along Jenifer Street on any given night and see that Plan B was not negatively affecting the neighborhood. If the committee was walking with me the other night, they would have observed that despite all their impassioned pleas, Plan B still has a lot of work to do.

1 thought on “Opinion: Plan B Should Try Harder”