Will we embrace the difficult change required to prevent future assaults? 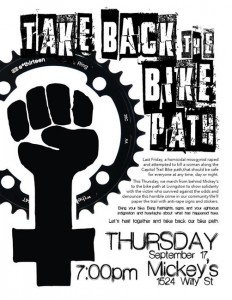 Following the brutal sexual assault and attempted homicide early Saturday (September 12) of a woman along the heavily trafficked Capital City Trail bike path, the neighborhood has been organizing ways to respond.

The Marquette Neighborhood Association is planning extensive discussions of the incident at it’s Board meeting on Thursday and hopes to outline some possible solutions and strategies to forward to City leaders.

Along with that effort will be the first outward community response, a march along the bike path from Mickey’s at 7 p.m Thursday to Livingston Street where the assault occurred.

Over 1300 people have responded to the Take Back the Bike Path Event’s Facebook page but how do we move from this outrage to lasting, sustainable action? How do we move from safer walking at night tips, better lighting and mace to no rape at all?

Fortunately, at least in the immediate area, the Internet discussion following the incident on Saturday has skewed toward new thinking about how to prevent rape. Acknowledging the basic premise that one human can rape another, the majority of sexual assaults are men against women, with acquaintance rape being the most prevalent.

We don’t know the age/background/education of Saturday’s assailant. We often talk about sexual assault at schools because that is where young people are concentrated the most. But rape happens everywhere and at all ages and it starts with the culture we all accept or allow to be acceptable…current male culture and privilege.

When I worked in sexual assault prevention in college in the mid-1990s, September was a scary time since 1 in 4 women would be assaulted during their time at college (has not improved); the majority within their first six weeks. The freedom of college, away from parents with lots of new and attractive young people mixed with alcohol was a dangerous confluence.

Additionally, each student came from a different culture, world view and value system. This all would clash instantly with mostly just hurt feelings because a poor choice of words here or there. But more often than we would like or like to believe; some young woman would be assaulted either verbally coerced, inebriated or drugged and thus not able to give consent, or in the extreme, brutally assaulted.

America did not become post-racial when Barack Obama was elected president; in fact the push back from mostly white males belies the white privilege that has been enjoyed for so long and now it is being threatened.

Women earned the right to vote in 1920 but they have yet to reap any real gains in equality that should really be theirs. Ninety-plus years later, while it may not be okay to say some things in mixed company, the same misogyny still exists today, validated by our media and us.

This is where we can take back the bike path when we say that male privilege and the thinking it entails and imposes on others is not okay. It starts with not using micro-objectifications such as “chicks” or “girls” when referring to a grown woman.

Did that woman just make you feel angry or upset? How about saying that, instead of she is a “bitch” or a “cunt”. Reducing women to these labels where no real equivalent male epithet exists ensures that a male perspective on women perpetuates. It is not a stretch to say those simple words can eventually contribute to rape years later when those attitudes are reinforced in men by us all.

Changing your language works. Just like you wouldn’t swear in front of your kids because they are impressionable, so are your friends, family, co-workers and community. Myself and another friend did just this in college; we dropped the degrading labels even when amongst only my male friends. Within weeks, even our friends had stopped using them.

We of course need to make our community safer through better coordination with police, safer infrastructure like brightly lit paths and so-on, but we also need to acknowledge that these moves leads to in some ways blaming the victim and not requiring our culture to change.

Lets also take back the bike path by rejecting our bad habits and learning to respect each other through language, attitudes and actions.