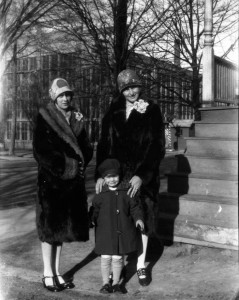 Preliminary work began August 31 which alarmed residents in the Marquette neighborhood as well as Risser and Taylor which had agreed in June to wait to press their concerns until after a demolition contractor had been named.

That process completed but DOA never communicated this decision publicly, instead only applying for a demolition permit from the City of Madison and notifying a few City officials.

The sprawling site, bordered by the Yahara, Main and Dickinson Streets, has served as a foundry, munitions plant, appliance plant, manufactured electrical supplies, housed a printing press and served as a service facility for the state’s vehicle fleet.

While any residual chemicals are a concern, chiefly it’s PCEs and PCBs which Taylor says were also a big problem at Madison-Kipp Corporation.

PCE‘s can get in the soil and travel by vapor. PCBs enter the environment through industrial spills and airborne releases. PCBs attach to soils or other mediums and then do not break down easily which means they can remain harmful for long periods of time.

“It does look like, thankfully this is not a site that has the problems we’ve got at the [Madison] Kipp site, which is massive PCE and PCB contamination, but this site has a lot of metal contamination,” Taylor said.

The September 11 meeting between the DOA, Ayres Associates(the demolition contractor) and Risser, Taylor and community member Diane Michalski-Turner covered a lot of ground but should have only been the first of several according to Taylor. She said they only had 90 minutes to cover all the site concerns and barely touched on the idea of a community meeting to inform the public. 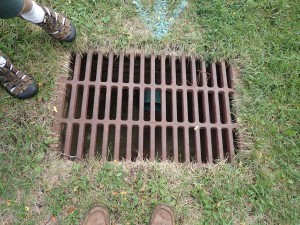 Some water run-off from the site drains to this sewer in the grass between the fenceline and the Capital City Trail Bike Path. Courtesy: FB/DOA Demolition

When Talyor asked the DOA how many communities ask to meet with them their answer was: “Zero”.

The promised DOA response came from Division of Facilities Management Administrator Cindy M. Torstveit who wrote that they “were happy to provide substantial answers to the concerns of the neighborhood.”

With the letter came the FAQ which was also posted on the DOA site and a statement that  the posted information provides all the needed information and “therefore, a public meeting is not necessary.”

The letter also noted that they were in the process of complying with a open records requests filed by the Marquette Neighborhood Association requesting several documents relating to the initial environmental assessment, erosion plan, air quality monitoring as well as construction schedules.

Risser and Taylor wrote back saying they were “completely perplexed and at a loss at your (DOAs) refusal to afford our community the opportunity to have this discussion.”

“It doesn’t put them out much to have one community meeting in a process for updating residents who have very serious legitimate concerns, but you know that is how this administration unfortunately operates, they don’t meet with people, the don’t take community input, ” Taylor said.

The good news, according to Taylor, is that testing has been done and they have a process for tearing down the building piece by piece rather than all at once. This includes asbestos dust mitigation by wetting down the areas and removing the material in bags. 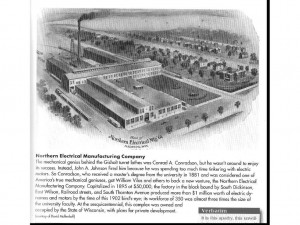 Taylor says that while many of their questions were answered to their relative satisfaction, more remain including a two key questions not covered in the FAQ; but which cut at the heart of this dispute: the lack of specifics and relative communications blackout from DOA.

First, who at DOA, that is not a public relations official, is the community’s point of contact during the project? Second, how does the DOA plan to keep the community informed as promised in it’s letter?

While Taylor says she and Risser are doing outreach within the community and making details from their meetings available, the community needs to hear from the people running the project.

“That’s not the same as having a person in the room who’s involved with the project, somebody from the DNR, can look you in the eye and answer a question. I don’t know why they won’t do it but they won’t,” Taylor said.

Meanwhile, each day more sounds, sights and smells are emanating from the site which, absent any context from official sources, fuels continued anger and mistrust at those in charge of the demolition.

A phone call to Cindy Torstveit was not returned by the time of publication.