END_OF_DOCUMENT_TOKEN_TO_BE_REPLACED

Both men grew up in the Marquette neighborhood and hope to create a bar that is accessible to the surrounding neighborhood while also seizing on the rising activity in the Capitol East District. Gentry opened One Barrel Brewing on Atwood Avenue in 2012, while Sullivan is a longtime business owner with three other hospitality establishments in greater Madison.  END_OF_DOCUMENT_TOKEN_TO_BE_REPLACED 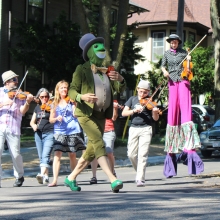